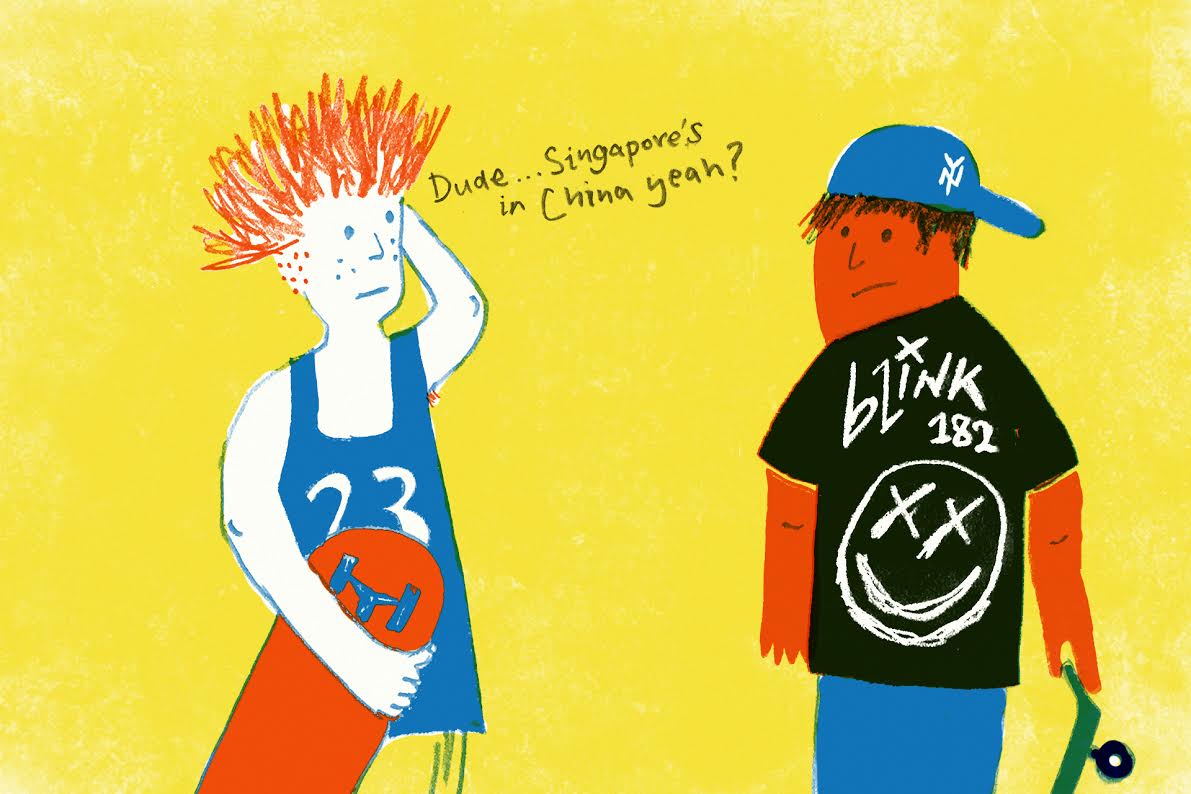 Illustration by Nuglybird, for Rice.
Singaporeans who start college in America tend to feel rather worldly. Not only could I tell all my classmates that I spent two years in the military—keeping details vague in hope of invoking Navy SEAL vibes—but I was also of legal drinking age and was always invited to buy alcohol and be forgotten at the parties after. Whatever, they weren’t classy affairs.

We worried about integrating before arriving to school, but that faded quickly. At the least, when compared to other international students, our linguistic abilities and cultural exposures from young allowed us to partake in traditionally local-heavy activities like writing workshops or singing groups. We could also bond with fellow students over embarrassing nostalgic touch points like Backstreet Boys, Blink 182, and Hypercolor T-shirts.

On top of that, we city kids felt particularly cosmopolitan with our knowledge of food, shopping, and optimizing the best travel experiences compared to say locals from smaller towns. Our initial apprehension slowly turned into surprise when we realized that, “hmmm, I think I may be a little bit cooler than these guys.”

And boy did we love facing ignorant local students: it removed the anxiety of being part of a society we had only watched from a distance growing up, and also reminded us that while we may not score high marks on class participation, we had substance. Nothing gave us a kick of superiority more than being asked the same set of questions:

“Why do you speak English so well?”

Besides immediately feeling smarter, we felt indignant and almost insulted that Americans didn’t know anything about our country or our region. And we couldn’t wait to tell our other Asian friends, often with a scoff and a roll of the eyes. However, I do not think that is fair.

We developed in-built cultural context without any formal education or Wikipedia help.

We would know so much more about America because of their decades of cultural dominance globally. We grew up listening to music from America. Popular TV shows and movies, from summer blockbusters to Friends, have so deeply influenced our cultural bearing that it seems natural for us to mimic their speech patterns (words and phrases, less accents), dressing, and social norms without feeling out of place.

We developed in-built cultural context without any formal education or Wikipedia help. And when living and studying abroad, it was as if we were visiting one part of our mental imprint.

On the other end, the chances are high that college-age Americans would only have heard about our country from what they have seen in the media. This explains their curiosity over Michael Fay or the chewing gum ban. It’s annoying, I know, but understandable. Their English media and entertainment exposure is similar to ours, but we have had the additional dimension of having grown up in Asia and Singapore.

From being patrons at Hard Rock Café, Starbucks and MacDonald’s, we are familiar with Elvis, Seattle, and the burger, fries, Coke combination. The inverse is not true—it is unlikely that an average American who has not travelled to Singapore would understand our food culture.

(It is improving: South-East Asian cuisine and the idea of “hawker food” has become more common in big cities like New York. We also have Anthony Bourdain to thank for putting Singaporean food on the map.)

Therefore, there is no need to feel offended when hipsters in Brooklyn only recently discovered “meat broth”, with us saying “It’s just like Ba Kut Teh. What’s the big deal?” There has not been a Ba Kut Teh franchise with thousands of restaurants all over the world, nor are we able to boast of over a billion Ba Kut Tehs served. It is unlikely our meat broth is familiar to any one else in the world. I am glad, though, that our cuisine and eating traditions are not prone to rapid franchising.

What is the equivalent of a “Singapore” to us? Belgium? And if we met someone from Belgium, would we itch to ask if they liked chocolate or waffles? Would they be annoyed if we didn’t know that there were three official languages spoken in their country? (I had to Wikipedia to make sure.)

I have met globally aware Americans who ask me about Lee Kuan Yew and are familiar with our culture, and kudos to them. But they are just as a minority as the set of Singaporeans who are familiar with obscure non-touristy destinations in Europe, or who can point out Venezuela on the map, or have a love for Ethiopian food.

The world can be open, curious and be kind about asking you more about your country, but we cannot expect that they come into the conversation already having the knowledge, nor be that privileged subset that is well-travelled. Also, not every one has the talent for reading and remembering facts about countries they Google, like cab drivers that can say “hello” in ten different languages which does comes across more like a party trick.

With this frame of mind, I am glad when people I meet ask me about Singapore, no matter how seemingly simple these questions can be. I just hope they don’t ask me too much about the army, else I would not be able to maintain my well-cultivated but highly inaccurate image of badassery. 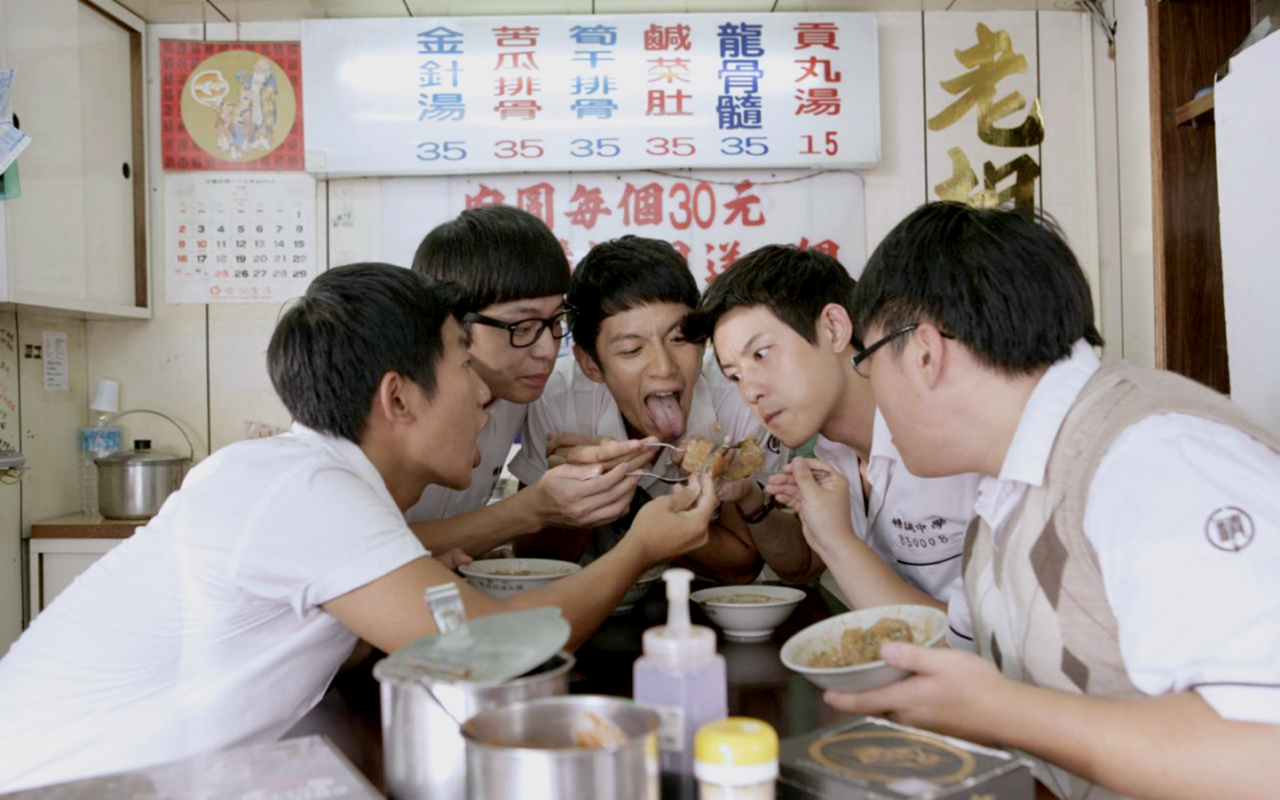