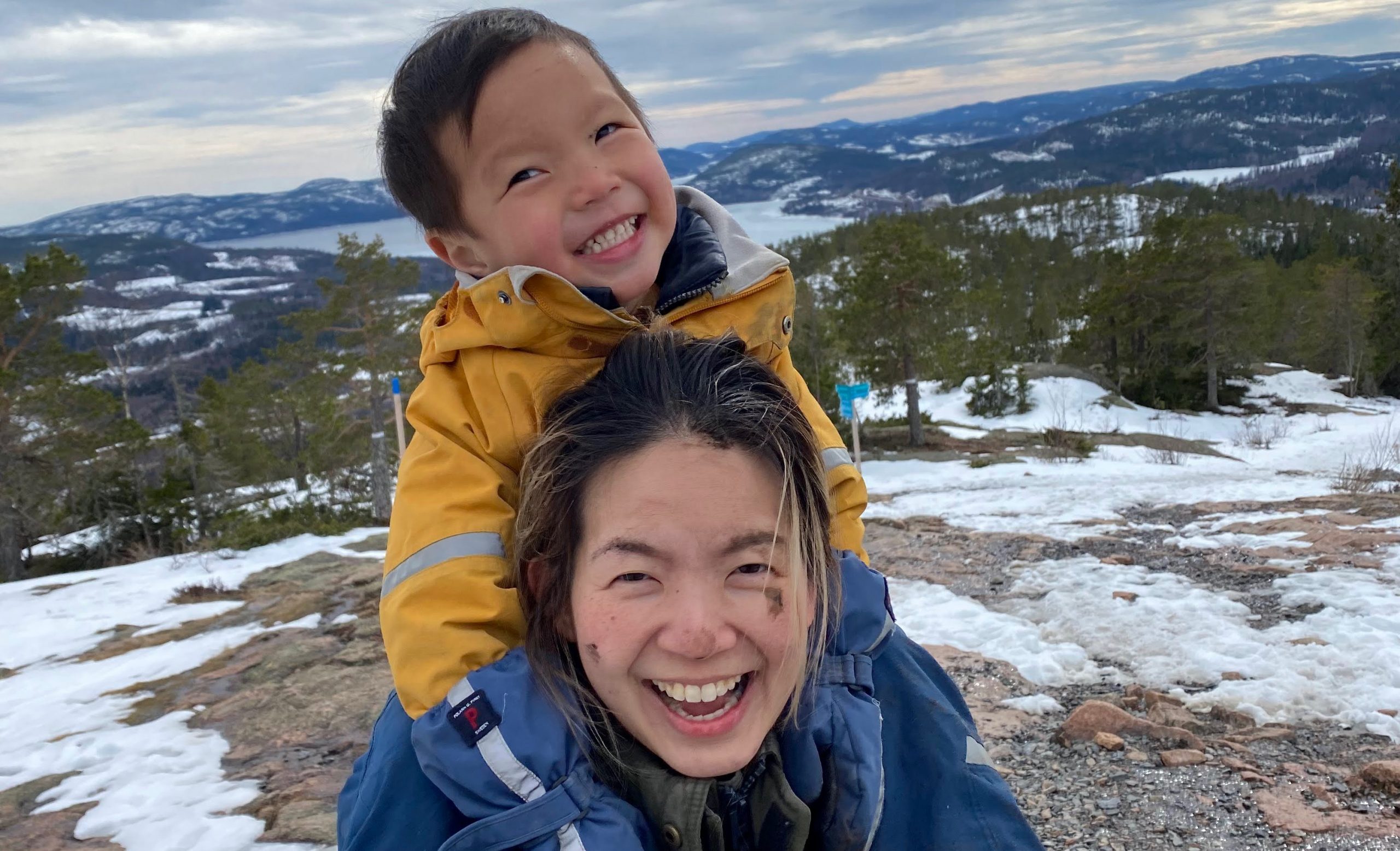 Top image: Min with her kids.

We’ve recently heard from Master Lim Say Fon, the stockbroker who decided to quit his job to become a master of incense, and Ryhan, the woman who fell out of love and became a tea farmer in Japan.

Now, we bring you Min, who started travelling in her 20s when she moved to Spain, then South Korea, and is now living in Sweden.

I still remember the look of shock on my parent’s faces when I told them I wanted to move abroad.

My then-boyfriend (now husband) had gotten a job offer in Spain, and they asked me: “Why Spain? Isn’t the unemployment there really high? You know, so many people are coming from abroad to live in Singapore; why would you want to leave?”

But when my parents eventually visited us for the first time, they had an almost instantaneous mindset shift. They saw how life could be slower and more relaxed, not always fast-paced.

It’s not that I don’t like a fast-paced life. We used to live in Seoul, South Korea, which, as you can imagine, was a bustling city. But now, I want to work less to live more. Which also means having to spend less. The less you spend and the fewer things you want, the less you need to work.

Sometimes you can enjoy cruising in life instead of constantly hustling for that next promotion or pay bump. This perspective is so different from the one I grew up with in Singapore.

Even now, I see many people in Singapore working evenings and weekends, never taking their annual leave.

Living in Sweden has forced me to take a step back and challenge that notion because they have a very pro-family outlook at work. Yes, I still give 100% when I’m working, but I have the flexibility to work remotely and take the time off I need.

Being here, I have also realised what a big consumer I was in Singapore. My outlook on consumerism has since changed drastically. A life of being attached to items is bad for your mindset and the environment, so I strive to live as minimally as possible.

While living abroad has helped me realign my values and think about what I want from life, I’d be lying if I said it didn’t get lonely at times.

When I moved to South Korea, I was the only married person among my friends—everyone else was younger. I often remember feeling like I didn’t have people like me around or company that I could relate to.

And when I gave birth to my first child in Spain, I didn’t have a community of support to get through the administrative and medical hoops of having a child. I remember going to a public clinic for the first time and no one there could speak a word of English. So I went to a private clinic, but the language barrier was an impediment too.

So, for my entire pregnancy, I didn’t really know what I was doing. Thank God it all worked out in the end—I really just winged it.

Still, I couldn’t help thinking of how my friends in Singapore who were pregnant had an entirely different process than I did. Those were the times I wish I was back in Singapore.

Living in Sweden has brought me a lot closer to nature. We stay in Uppsala, a small city near Stockholm, where there isn’t as much to do as in other big metropolitan cities.

Shopping isn’t a big pastime here because there are only two malls, so most people opt to do outdoor activities. Our friends love to go camping and hiking. They have taught us a lot about bushcraft, how to cook outdoors, and other tips and tricks about nature.

This is quite different from the life we had in Singapore, where we seldom bothered to stop in our tracks and look around because everything was moving so quickly.

Global environmental issues also felt so far away. Whereas here, it all feels much closer because we live with four seasons.

It’s easier to notice temperature changes and weird weather patterns, and it really puts into perspective how much climate change impacts our lives. We also have a lot of older friends who tell us how much winters have changed over the decades and how different summers have become too.

For these reasons, we want our kids to grow up closer to nature. That’s why we chose to send them to a forest school on weekends, which places key importance on exposing children to our environments.

There, they get to examine, experiment and explore, and draw their own conclusions. So, for example, because we go back to the same forest year-round, the kids will sometimes tie ribbons in certain areas and come back in different seasons to see how things have changed.

The more they are exposed to nature, the more they will want to be outdoors, and the less they are glued to screens.

One day, I also hope they will want to give back to nature and choose to live a lifestyle that is less destructive to our environment.

On weekdays, we send them to a parent cooperative school, which is a school system where parents are more involved with the school through duties like cleaning, budgeting, and finance management.

We prefer this set-up because having parents become more involved in the school helps build a strong community environment, which benefits the kids as well.

We chose the combination of these schools because we didn’t want our children to be in a highly stressful environment at such a young age. Kids have their whole life to be stressed, so I’d like to give them some years to enjoy their childhood.

I’m sure a lot of mothers would agree with me and would do the same, but it’s not possible for everyone depending on where you live. I’m privileged to be in a place that supports this way of thinking.

Still, one thing I encourage all parents to do—no matter where they are—is to let their kids do nothing. Yes, nothing.

When I’m in Singapore, parents always ask me how I entertain my kids, what activities I bring around for them when we are out and about, and what after-school lessons I plan.

Some parents think their kids need to be constantly engaged or else they become unproductive. But actually, letting them be bored is one of the best things you can do for them. That is when creativity happens.

For example, when we are in the waiting room of a clinic, I just let them run around or sit there—it’s their choice. It is amazing to see the interesting ways they come up with to entertain themselves.

I’ve always found it odd that in art enrichment classes in Singapore, all the kids are taught to use the same techniques, resulting in everyone producing the same artwork. It shows how creativity doesn’t thrive under excessive structure—it needs space.

Sometimes, I would give my kids some art materials and zero instructions, and let them come up with whatever they want. It’s such an interesting process to witness.

The Gift of Freedom

Being here, I’ve also learnt a lot about what it means to give children the freedom of choice.

It can be frustrating for me because when she gets home, she is often tired. But I do see the value in teaching kids how to choose for themselves.

For example, schools here allocate a certain amount of time a day for nap time, but these are optional. The kids can decide whether they want to nap or play. At first, my daughter would go for naps—until she realised she could play.

And as they get older, I want my kids to hone a strong sense of self. One day, they will need to choose what they want to study and what they would like to work as.

When that happens, I want them to have as many options as possible. I don’t think they can do all this in the Singapore education system—there’s just too much pressure.

I guess I am also speaking from my own experience, as I was never the most academic child. My husband, on the other hand, was very academic, so he thinks that pressure is good. To an extent, I agree with him.

Ultimately, it’s about finding the balance. Singaporeans are really good workers because of the schools we attend. We are very results-driven and we get the job done fast.

The downside to this, however, is that we are afraid of failing, so we don’t take risks or think as creatively as we can.

The Swedish people here may not always be the most efficient, but they are not afraid to take risks. They are also willing to accept that some endeavours may not always work. There’s less stigma around failure—scrapping something and starting over isn’t considered bad or a waste of time.

In Singapore, there’s a big fear of sunken costs, so there’s a bigger tendency to keep at something when you should instead take a step back, breathe, and figure out what is the best way forward.

While we are currently happy in Sweden, I believe that one day we will return to Singapore. Living abroad has shown me that it is possible to break out of the bubble and aspire for different milestones—it’s not only about going to university, meeting someone, getting a job, and then applying for a HDB flat.

Singapore is a highly privileged place. Singaporeans can live there, work there, and there’s a future for everyone on the island. It’s not a place where you are forced to seek out opportunities abroad, which, on the flip side, is why most Singaporeans never really think about leaving.

But taking a step out into the world shouldn’t only be about necessity. There’s so much you learn about yourself from doing it, and you gain countless lessons that can’t be taught in the classroom.

For now, I don’t want my life to be only about having kids or working until I physically can’t anymore. I want to seek out experiences that make life fulfilling and purposeful. And this isn’t necessarily about being abroad or in Singapore; it’s about honing a mindset that allows you to live more authentically.