Yesterday, The Straits Times published an op-ed by associate opinion editor Lydia Lim on how the newspaper has been trying to innovate.

In turn, companies who are facing inertia in their bid to transform themselves could take a leaf out of SPH’s book.

However, Ms Lim’s column reads more like a PR piece to defend the company’s financial struggles than an actual dissection of innovation; her 1,300-word article is also locked behind the newspaper’s “premium” paywall. No surprise that for the longest time, most Singaporeans have considered SPH and innovation to be as compatible as Donald Trump and immigration.

SPH’s main challenge, Ms Lim writes, is how it can “better engage audiences”. Yet, as the company still attempts to recover from a 25% drop in profit in Q2, its only solution has been to widen the coverage of its paywall.

What started as a few in-depth articles branded with the ‘Premium’ tag has now expanded to include about 80% of Singapore-centric articles.

On its site, ST calls its subscriber-only articles as “some of its best content”: exclusive stories, interviews, features, as well as in-depth opinion pieces by the paper’s senior writers and network of contributors.

But just by looking at ST’s premium stories over the weekend, this doesn’t seem to be the case.

Should the company be surprised at all that Singaporeans aren’t reading them any more when they are forced to pay for content as such?

The absolutely mundane, written by the paper’s best

When ST subscribers pay to breach the paywall, they expect to break away from the “same shit, different day” pattern.

Yet we now have our standard daily community newsfare being branded as “premium”, such as “Service to Meet Seniors’ Long-term Care Needs”.

This is essentially a PR piece for a seniors’ care centre that you would typically find in pages B4 to B7 of the Home section.

Is it an exclusive story? No.

Is it in-depth reporting? No.

Are there engaging visuals? No.

In fact, the only reason why the above story is branded as “premium” is because it’s written by Salma Khalik, the paper’s senior health correspondent. On her byline page, 18 out of 25 stories are locked under the paywall, but more than half of those are actually standard news reports.

“SGH and NUH on Standby During Summit” (June 9) and “One Known Law for Healthier Teochew Kueh” (June 19).

The same trend can be observed with senior transport correspondent Christopher Tan. His premium articles include “Low COE Prices May Fuel Scrapping of Newer Cars” (July 8), “Peter Lim’s Johor Track Being Reviewed” (July 3), and a slew of car reviews.

This is the badass, “not afraid to diss SMRT and piss Khaw Boon Wan off” Christopher Tan we’re talking about. I’d want to see Mr Tan’s premium article destroy Grab with a nuke left behind by Kim Jung Un at the Sentosa summit, not your run-of-the-mill transport news on COE prices that I already don’t bother reading when it’s free in the first place.

Instead, it seems that when it comes to “premium” articles, we are simply paying the salaries of “premium” senior correspondents and not for the “exclusive” groundbreaking journalism that we are promised. Much like paying more for a Burger King Angus beef Whopper when it still tastes as ordinary as the original burger.

The premium content branding has also somewhat evolved to encompass not just high-quality journalism, but content that revolves around “high-quality subjects”.

“Wah, so atas,” you think. ST couldn’t agree more, which is why this review, like Chris Tan’s report on COE prices, is locked behind a paywall.

After all, if you can’t afford to pay $14.90 for a basic premium subscription, then you most definitely cannot afford to buy a car or tuck into premium ingredients like caviar, wagyu, and lobster at Justin Quek’s Chinoiserie. For the peasants who are curious how the food tastes but are not allowed to read his review, Mr Wong says that the cooking is, and I quote, “really not bad”.

Not bad a review for a premium article too.

If you’re looking to the national newspaper for some tips on a vacation in fanciful places that are still geared towards average Singaporean tastes, you are unfortunately out of luck too. Such content is only made available to subscribers, as is the case for their itinerary recommendations for Tokyo and Hawaii.

While subscribers can enjoy the scoop on such privileged information because they are paying for it, the rest of us have to be content with the basic recommendations on TripAdvisor’s Top 20 list.

But don’t worry, ST hasn’t forgotten its reader base who may not be high-SES. Thanks Eunice Quek for not locking your affordable nasi padang recommendation behind a paywall. I know the temptation must have been hard, since it’s located at Raffles Specialist Centre.

Then there are these articles, which are pretty self-explanatory:

Refer to ST Premium’s checklist again (see above), and one wonders whether the decision to label them as “premium” is decided with a coin toss.

For $14.90 this month, I’m reminded that the biggest sporting tournament this year is a nice little break from how fucked up the world really is. Yet the ST writer’s telling me he doesn’t seem to understand football nor the significance of the World Cup. Perhaps he should read this piece by my colleague Pan Jie.

It would help. And it’s free too.

Come on ST, you can do better than this.

It’s a shame that the “premium” section has over the last few months been diluted by its regular news reporting and other content that really doesn’t deserve to be branded as such.

Yesterday’s analysis on water security was a great read, and readers expect to see more of such in-depth, thought-provoking content when they pay $14.90 a month. It shows that ST, for all the criticism it’s gotten, hasn’t lost its relevance as the national newspaper.

All media outlets serve a different function, and as much as we constantly poke fun at ST, they have continued to earn our respect by covering the news and issues that other platforms can’t. With the vast resources that they have, we honestly just expect better. And the readers who pay for “quality” journalism deserve better too.

If ST believes that its current subscription model is an example of good innovation, then neither another 100 hours of brainstorming and workshopping nor another change of its CEO can save it from what looks to be a bleak future.

What kind of news would you like to read? Let us know at community@ricemedia.co.
Share to
Related Articles 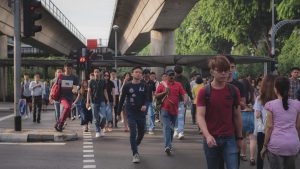 NYT Editorial Guidelines For Responsible Reporting in South-East Asia 1. In Singapore, a city-state famously described by William Gibson as Disneyland With The ________. A) Death Penalty B) ERP C) Low Fertility D) Pedophiles Removed   2. Under the city Disclaimer: RICE does not endorse or support any political party in Singapore.  Conventional wisdom suggests the PAP will win a Covid-19 general election. Conventional wisdom tells us: A strong economy translates into more support for the opposition, while instability favours the PAP. Proving