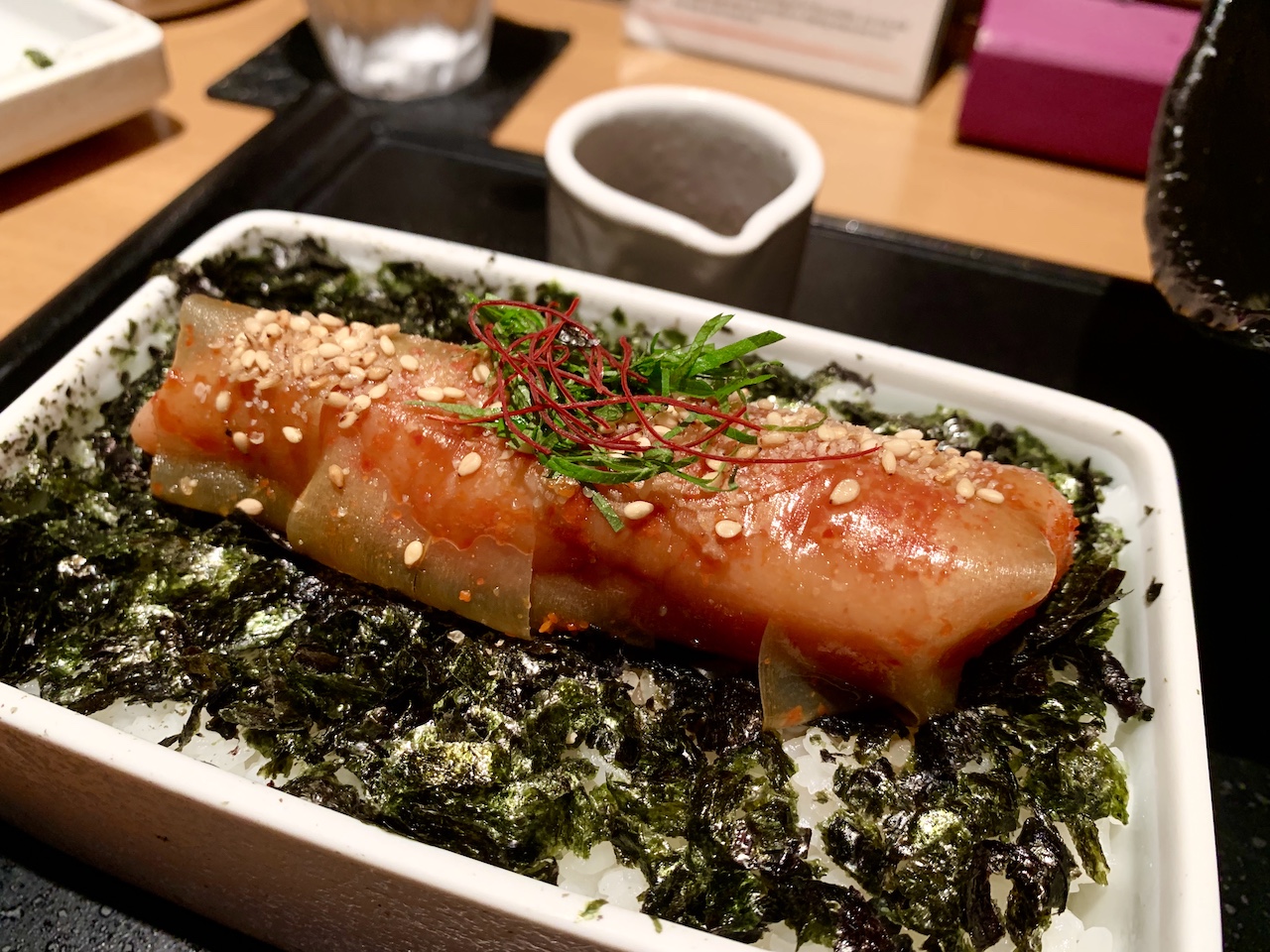 Singapore loves everything Japanese. Mentaiko, a salted and marinated cod roe, is no exception. During a café hop, it is not uncommon to see mentaiko lurking around flirtatiously on the menu. Even Burger King launched their own umami mentaiko burger earlier to tap on our nationwide love of mentaiko.

Its popularity is not limited to Singapore, but spans the region. Its unique taste also captivated Indonesia, prompting the country to come up with the world’s first halal accredited mentaiko in 2017.

However, do you really, really, know what mentaiko is?

Is it mentaiko or tarako?

Tarako is often mistaken for mentaiko because of how similar they are. It is interesting to note that tarako, which usually looks pink or beige, refers to the roe of the Alaskan pollock fish, and is plain and salted. Mentaiko, which is also a sack of salted cod roe, is—in contrast—marinated, and has a strong flavour profile.

Why is it important to know this distinction? Honestly, it isn’t, unless you’re looking to drop fact bombs on others to establish yourself as a mentaiko purist. And as a nation of foodies, one would think this is something all of us would enjoy doing.

As an aside, it can be a blessing to not understand Japanese due to the explicit nature of how the Japanese name their food. When you eat tarako, you are eating the ‘children of cod fish’. When you are eating Oyako don, you are not eating a chicken and egg rice bowl, but a ‘parent and child’ rice bowl.

But returning to the topic of mentaiko …

Mentaiko is generally more popular than tarako. Just as how various types of marinated fried chicken can be more well received than plain fried chicken, mentaiko offers more flavour profile options for its patrons. Over time, as more and more people have started referring to cod roe as ‘mentaiko’ by default, it explains why most Singaporeans don’t even know what ‘tarako’ is.

Another popular type of mentaiko is ‘karashi mentaiko’. For Singaporeans who don’t understand Japanese, the meaning of ‘karashi’ is often obvious from the red packaging with chilli cartoons drawn all over. Karashi mentaiko refers to mentaiko that is seasoned with red chilli pepper sauce, and ‘karashi’ literally translates to ‘spicy’.

Mimicking the taste of the sea, cod roe is salty, savoury, rich, and thick. It isn’t overwhelming, unlike uni (sea urchin) which one can quickly grow sick of eating. Because this delicacy packs a salty punch, it is always eaten in small amounts. You will never see someone chewing on a chunk of mentaiko or tarako by itself, which would be like chugging Marmite on its own. Good cod roe is typically seasoned very simply to allow its original flavour to shine.

How is it made?

A surprisingly large amount of processing work is done by hand. After cleaning the selected cod roe, a concoction of spices and seasonings not limited to chilli powder, spicy mustard, sesame, black pepper, and more, is added. It is then left to soak in a marinade. Skilled ‘mentaiko technicians’ are even able to almost perfectly gauge the weight of mentaiko by holding it in their hands.

Soaking the mentaiko longer allows the flavours to penetrate the mentaiko better. The finished product is then checked by ‘flavour guards’ for quality and consistency. The last thing you want is to purchase a box of mentaiko, only to have every bite taste different.

How do you eat it?

Mentaiko goes well with rice alone, but it also complements alcohol, and is a great topping for ramen, pasta, potato salad, and baguette. It’s no surprise then that mentaiko has been so easily incorporated into Singapore’s carbohydrate-heavy food scene.

A quick glance at hipster cafe menus in Singapore shows this: mentaiko dishes such as mentaiko pasta, mentaiko fries, mentaiko prawns—mentaiko everything. Who knows, the next sensation could be mentaiko roti prata, mentaiko biryani, or even mentaiko chicken rice.

Just how popular is mentaiko in Japan?

Ask any Japanese which city is most renowned for mentaiko and you are bound to hear a collective chime about Fukuoka, a city located in Kyushu.

After touching down at Fukuoka airport, mentaiko souvenirs can be easily found everywhere. In airport stores alone, you’ll find mentaiko crackers, mentaiko mayonnaise, as well as countless other mentaiko-flavoured snacks on display at tax-free prices.

After alighting at Hakata station, which is the largest railway station on Kyushu island, mentaiko products take up an entire section of the underground Takashimaya-like store. Raw mentaiko is also available, and mentaiko lovers will struggle to keep calm.

You are likely to see more locals than tourists snagging up these ‘omiyage’ (translates to ‘souvenirs’).

Likewise in the city itself, mentaiko products are everywhere in souvenir shops, restaurants, izakayas (similar to Japanese pubs), etc. There are even mentaiko speciality stores starring mentaiko as the main dish.

With its immense popularity in Japan and abroad, it might come as a shock to know that mentaiko did not originate from the land of the rising sun.

While Fukuoka, which is located in Northern Kyushu in Japan, manufactures a lot of mentaiko, it is not the birthplace of the produce. In fact, mentaiko isn’t even from Japan.

Fishermen in the Korean Peninsula first discovered the rich flavour of fish eggs between the 17th to 18th century. Then, the raw materials for mentaiko was known as myeongtae, which refers to the ovary of the walleye pollock. The inner organs of the walleye pollock tend to go bad quickly, and are hence typically removed. During winter, it is frozen then dried outdoors with salt as a preservative. These evolved to become popular foods used in Korean rituals.

Later, the salted cod roes are seasoned with red peppers. Known as myeongran jeot, this spicy taste appealed to the Japanese. In 1807, myeongran jeot was exported to Japan via Busan to Shimonoseki. Its market also extended to the Kansai region in Japan and Dalian in China.

In the beginning of the Taisho era, the Japanese started to reside in Korea and developed a further liking of the ingredient. After World War Two, the Japanese living in Korea were repatriated. Reminiscing the taste of mentaiko back in Korea, they began making it themselves. Mentaiko soon became popular in Japan.

The oldest mentaiko company, “Aji no Mentaiko Fukuya”, was founded by Toshio Kawahara after slight modifications to the original mentaiko recipe to facilitate mainstream appeal. In 1949, Toshio introduced mentaiko to the Japanese. The company’s first sale was on 10th January, which later became Mentaiko Day.

The fact that mentaiko first originated from Korea is unsurprising if you look at the geographical location of Fukuoka, which is near Busan in South Korea. The two cities are a mere four hour ferry ride apart.

In fact, cities in Japan that are located near other countries are typically home to fusion dishes incorporating their neighbours and history as part of their local cuisine.

Take Okinawa for instance. Its food has not only been influenced by its neighbour, China, but also by various Southeast Asian countries and the United States due to its history. The traditional cuisines developed during the Great Trade era from the 14th to 16th century when the Ryukyu Kingdom needed to cater to the tastes of Chinese envoys. These dishes contained the wisdom of ancestors who ate well and lived healthily—nutritionally balanced and containing ingredients rich in vitamins such as bitter gourd and pork that has been prepared to break up fat over a long period of time.

After the war, American food culture, which is represented in Okinawa’s canned pork, also made its way into the diets of locals.

By tracing the origins of local cuisines, it is easy to see the cross border cultural exchanges that once took place. The next time you feast on mentaiko or walk past it at the Japanese food section, think about what it has been through to become what it is today.

Is mentaiko everything it’s hyped up to be? Tell us at community@ricemedia.co.
Share to
Related Articles