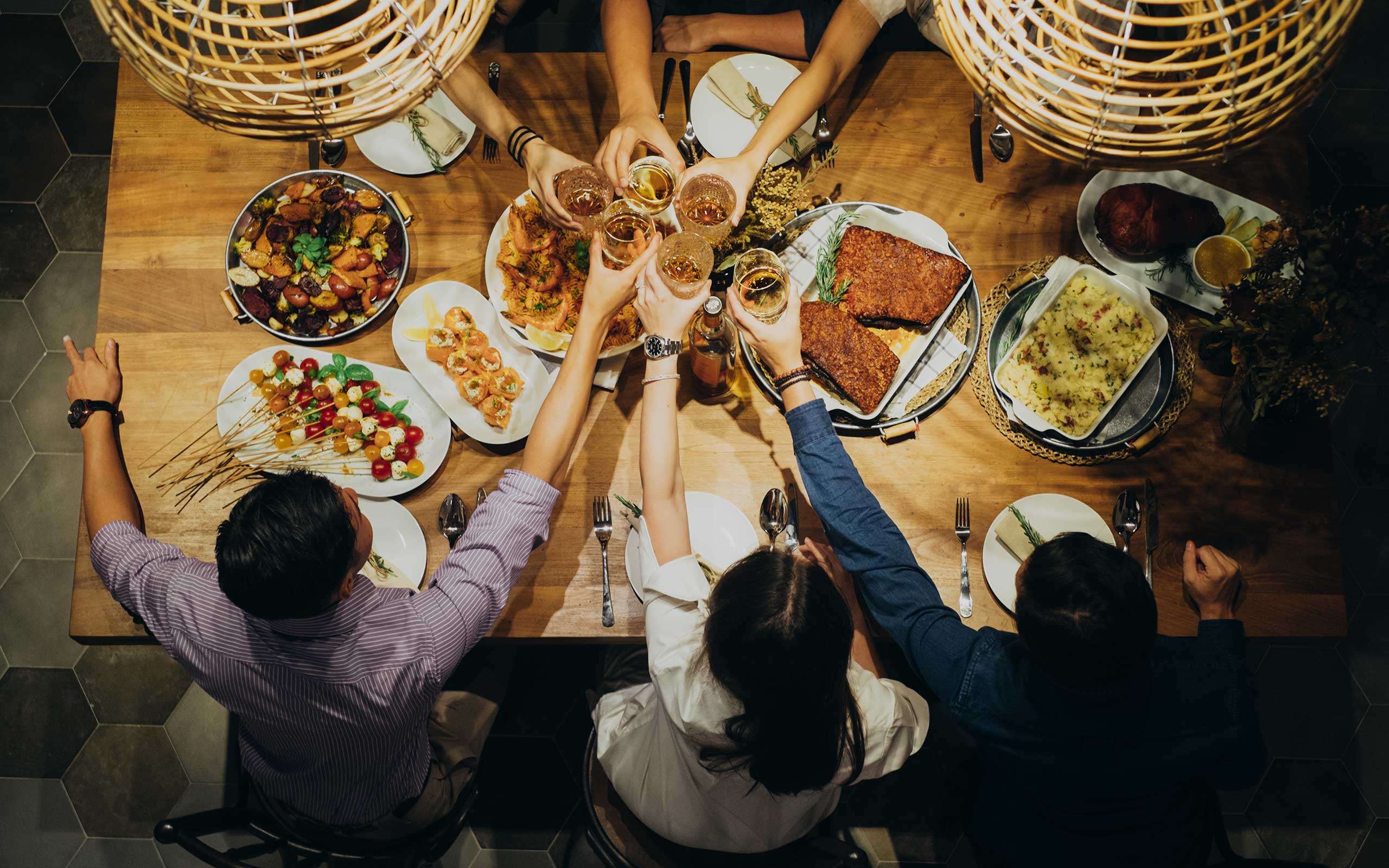 Here’s the thing, Mark (our editor) foolishly promised his fiancé Elie that he’ll host a Christmas dinner if they move in to their new home before the 25th. Miraculously, they did, and he now has to keep his promise (Editor’s note: Guys please file this under “examples of promises not to make.”)

Somehow, despite not having enough furniture and not knowing how to cook, they pull it off.

This story begins with a promise and an empty home. Like all our favourite Christmas stories, this one is also about making wishes come true.

Right now, the guests are just arriving. Everyone has been told explicitly not to bring presents. “Just food will do!” they’ve been emphatically reminded in the week before the party. And now they understand why.

(Pro-tip: If you don’t know how to cook, ask your friends to bring food instead of presents.)

The home is barely furnished. While blinking fairy lights hang across the ceiling, things like the new washing machine, new dressers, new plates and cutlery even, are still sealed in boxes. If not for the fact that this is a potluck dinner, there would be no party. Those who’ve been hearing about Mark’s attempt to pull this off at the eleventh hour are relieved to find they won’t be sitting on the floor tonight.
But this story is not about Mark or the guests he’s invited to make this year’s Christmas special. In fact, Christmas this year is much like it’s always been. The faces around the table are the same ones every year, with one difference: Elie’s smile has never been this radiant, and it makes it look like it’s the first time she’s had all the people she loves in the same room.

“We’ll move in by December for sure,” Mark had told her 6 months ago. Back then, it seemed perfectly reasonable. Who knew it would take this long to lay a bunch of tiles?

(Pro-tip: Fairy lights make everything look better, even if you don’t have furniture or tiles.)

For most of us, the end of the year brings relief in all forms. If we’re not on a well-deserved holiday, we’ve just wrapped up a big assignment. Some find themselves looking forward to fresh career opportunities in 2017, while others are just grateful for the clean slate the new year inevitably offers.

Yet these thoughts and feelings pale in comparison to the smell of fresh paint and newly varnished wood—smells that are not just sensations in our noses, but also the beginnings of new memories.

As everyone gathers around the table, still pristine and flawless, it is the repetition and the familiarity of old jokes and expected routines that bring joy. Ever eager to impress, Paul is the first to unveil his latest recipe for fried chicken.

“I used buttermilk in the batter this time,” he says, beaming with great satisfaction. Paul works in finance and spends most of his week crunching deals in the CBD. He’s also the group’s resident youtube chef.

Peter, the only guy in the room who actually cooks for a living, retorts, “Dude, people have been doing that since forever.”

Having spent nearly his entire life in restaurant kitchens, he doesn’t cook unless he’s at work. And so he’s usually the one who brings the drinks.

“I know you haven’t had the time to buy champagne or whatever, but I also thought we could do something a bit different this year,” Peter says to Mark as he removes two bottles of whisky from a bag and sets them on the table.

No one really knows what to say at this point. But as Mark and Elie begin unboxing new cutlery to be used for the very first time, rumbling stomachs begin to distract from affectionate teasing. Mark sets out the roast pork and the smells of warm food released from cling wrap reminds everyone how nothing beats a home-cooked meal. Never mind that it came from six different kitchens.

(Pro-tip: Roast pork (or sio bak as we call it in Singapore) is way easier to prepare than a fully stuffed Turkey. And in opinion, tastes better too.)

Somewhere to the side of the action, a soft, reverberating pop resounds. It’s the sound every whisky lover has come to know as a bottle being opened for the first time.

“You read my mind,” Mark says as he stops what he’s doing to walk over with an empty glass.

“The best thing about whisky,” Peter says as he pours, “Is that you can drink it any time you want.”

Something’s a little different about what they’re having this time. It’s a little spicy with a hint of sweetness. “There’s definitely chocolate in there,” one of them says. “And ginger perhaps.” In response, the other just shrugs—his way of saying he has no complaints. Between them, a wordless question passes. Should they share it with the rest?

(Pro-tip: A good bottle of whisky, such as The Macallan Edition No.2, will pair better with Christmas food than anything else.)

Everyone knows it isn’t worth pointing out that Mark had just barely kept his promise.

As the evening progresses, someone is wishing there was more food. Another wishes there was more to drink. But these thoughts float languidly through their minds. In truth, everyone has eaten too much, and they’ve all descended, for a moment, into the province of their own inner worlds.

Elie picks at the remainder of her dessert, the remnants of a smile still lingering on the corner of her lips. Next to her, Mark wonders if this new space of theirs is in fact too much space for two. The tinkling of piano keys drifts out from a speaker, gently bouncing off the walls. And in a corner somewhere, there is a small chip where the painters had been a little careless.

Otherwise, this is a home. Not once during the entire night has this come up. Everyone knows it isn’t worth pointing out that Mark had just barely kept his promise. Which is the only thing that matters in the end; delayed deliveries and accidental mishaps notwithstanding. All things considered, tonight’s party has been spun out of thin air and good intentions.

And the thoughts at the dinner table are now with all those moments where they never thought they could make something happen. Where the stars seemed as though they refused to align, where all the ingredients were wrong and the timing was dreadful.

Yet tonight’s dinner is proof that sometimes, it doesn’t matter. 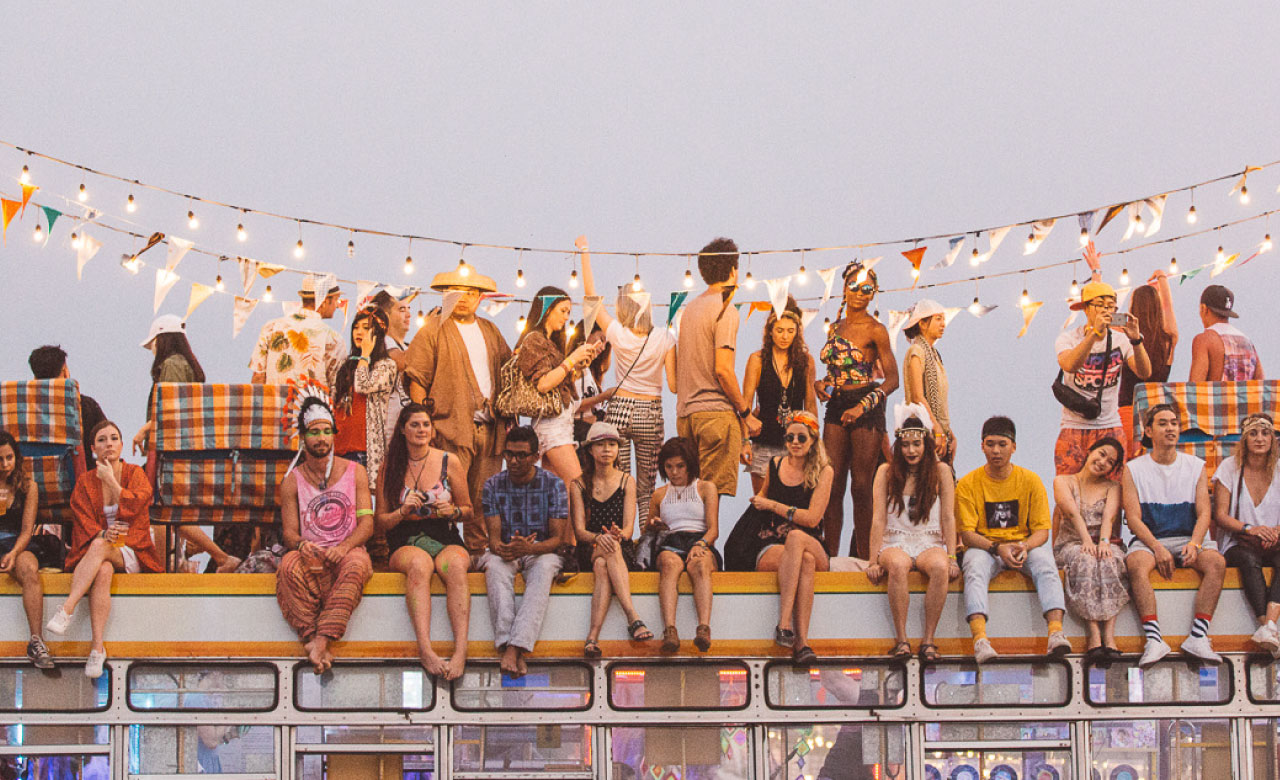 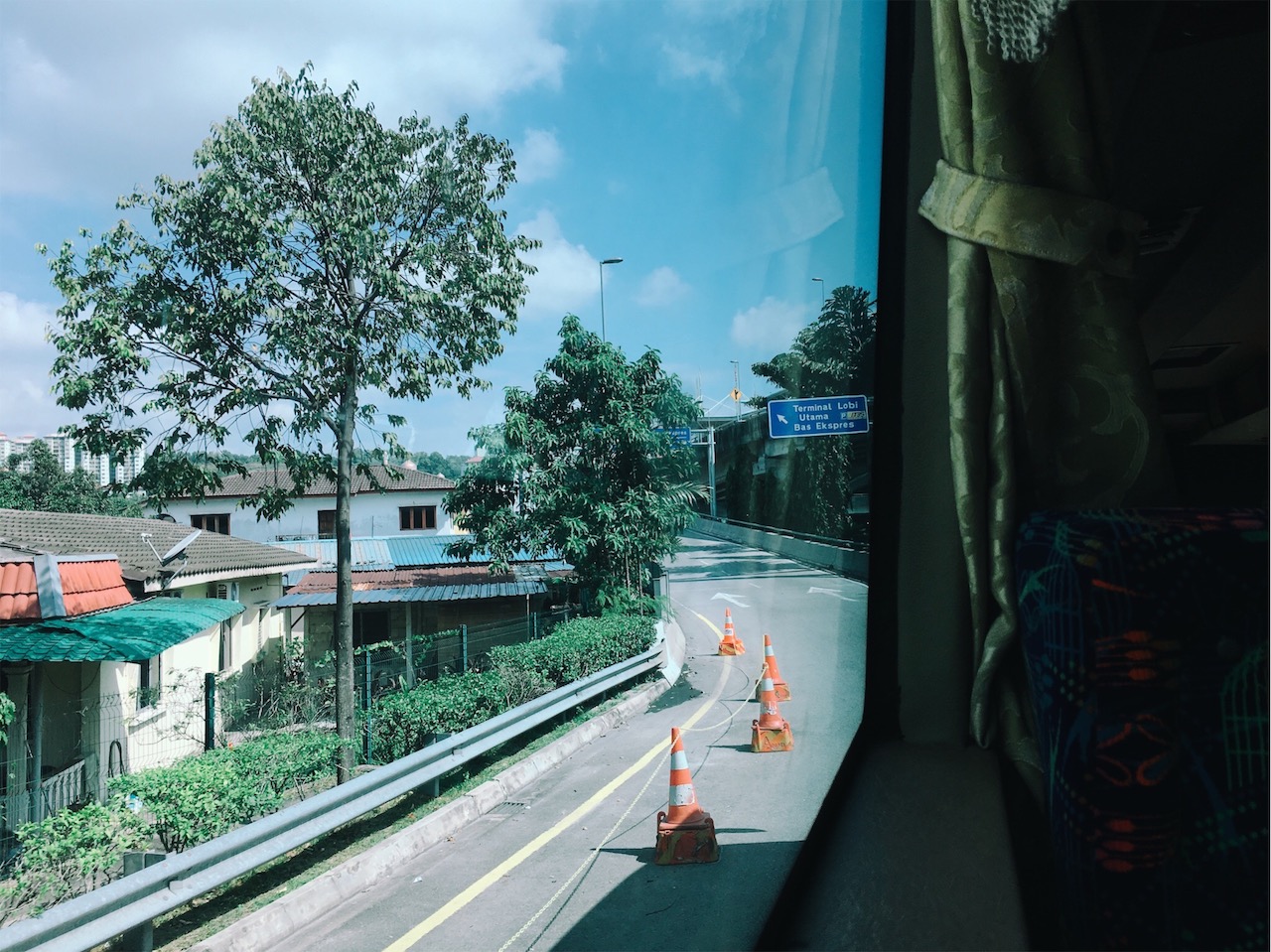 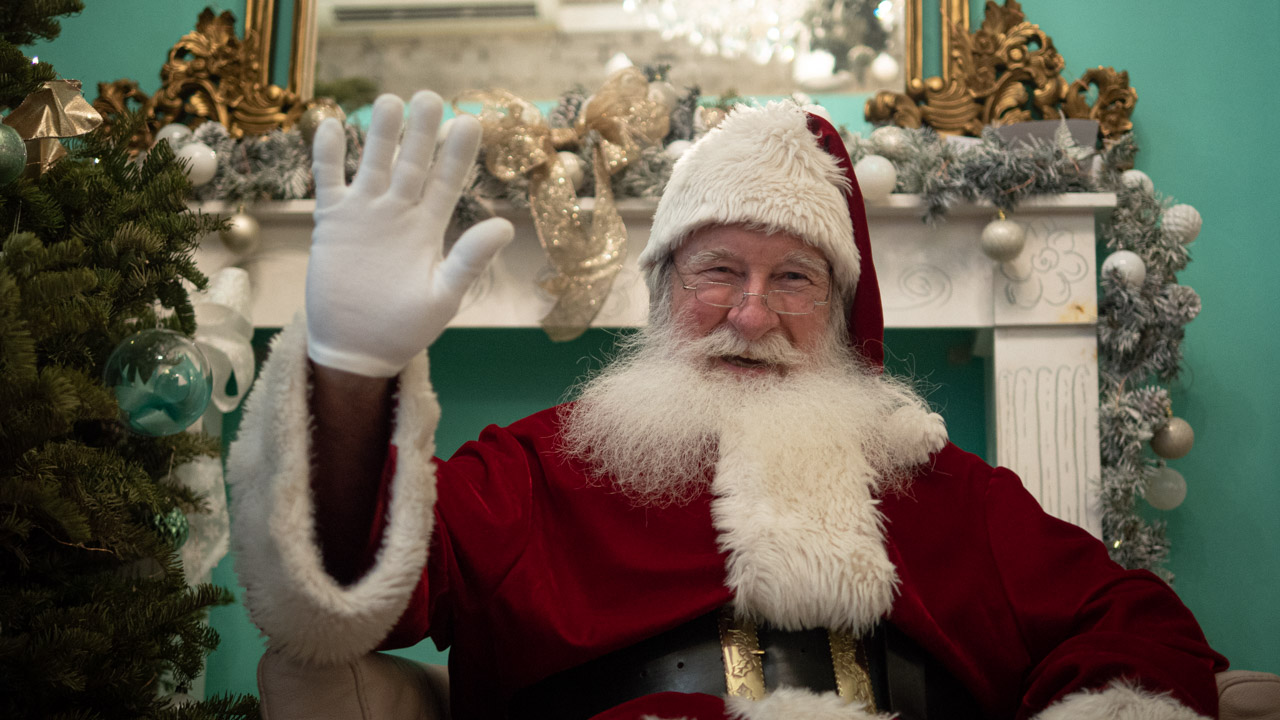 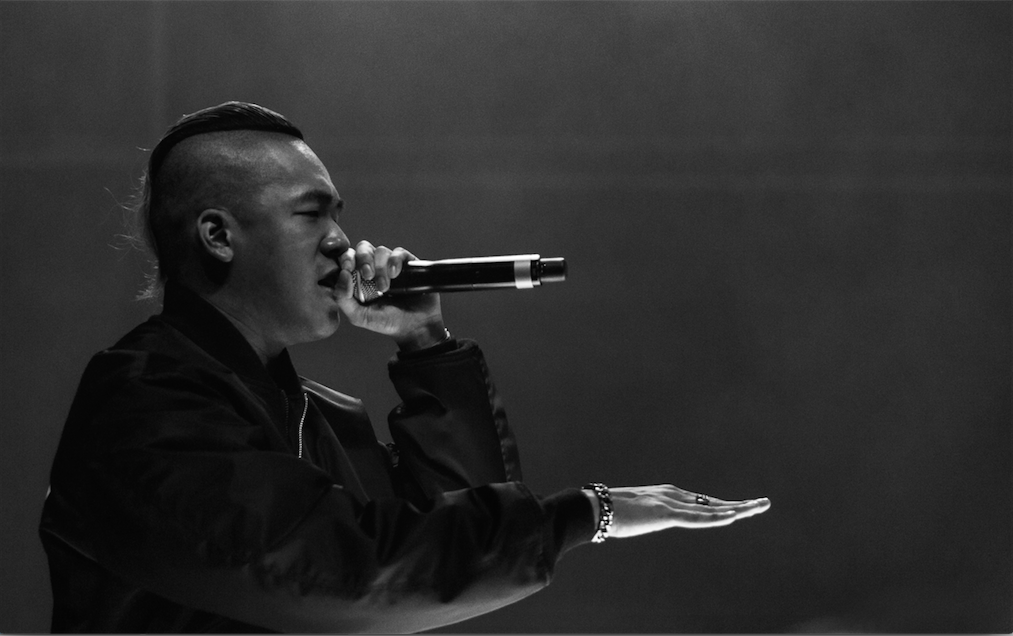