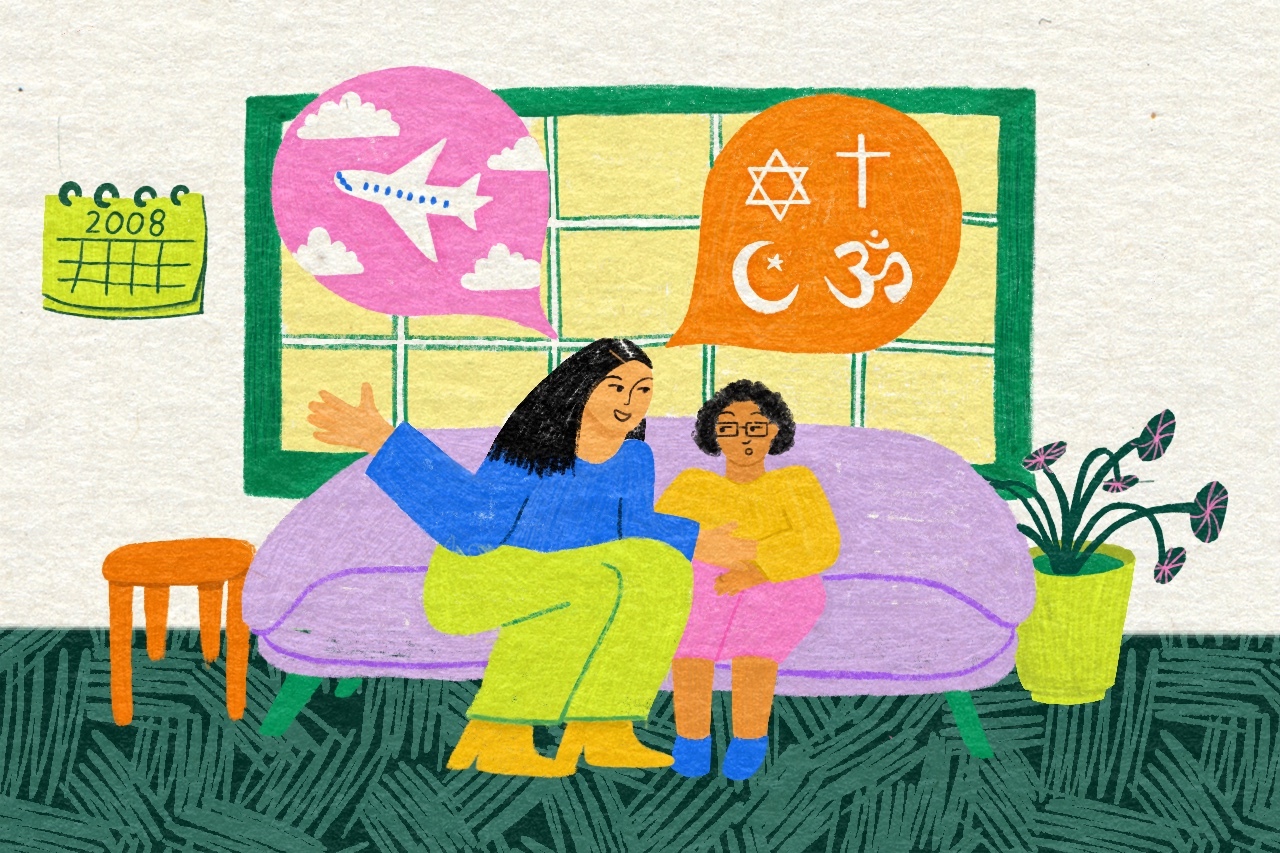 Growing up, I wasn’t a particularly religious Muslim. My parents sent me to madrasah (religious school) classes every weekend. I had Quran lessons once a week. I tried (very hard) to pray five times a day.

It felt like I was simply going through the motions. I didn’t feel much of a connection to Islam.

Weirdly enough, my relationship with religion changed when my aunt moved into my bedroom in 2008. She wasn’t Muslim. She was Christian.

Written from the perspective of Yulianna

As an impressionable nine-year-old, I was intrigued by the limitless life my aunt seemed to live. It felt worlds apart from the rigid rules I perceived as a young Muslim (You’ll go to hell if you don’t pray is my favourite).

My aunt often shared stories about her travels around the world. She spilled the tea about the men she dated, all of different ethnicities and nationalities.

Because of her stories, I’ve always been open to interfaith and interracial relationships—my late grandmother was Muslim, while my late grandfather was a Christian who converted to Islam. It’s the reason why my aunt is Christian, and my mother is Muslim.

Ultimately, my mum and aunt were taught to embrace differences in faith and were also given the freedom to choose their own religion. This meant they were more than open to me exploring interfaith relationships too.

Once, I asked out a staunchly Christian acquaintance for a Christmas Wonderland date. He said no. I was also interested in a friend for a few months, only to find out he’s already committed—to being agnostic, that is.

Reality set in for me as an adult. I realised that marrying a Muslim might be the easier path because conversion can prove to be difficult for some.

My fondest memory with my aunt was the night I cried over Jay Park.

One fateful night in 2009, I was an 11-year-old fangirl whose heart was broken at the news of Jay Park leaving the K-pop group he was in. I was devastated at the thought of my favourite singer’s career coming to an abrupt end. I felt silly crying over it, but my aunt embraced me without judgment. I don’t remember exactly what she said, but I remember the comfort.

I often felt guilty about my dependence on music instead of the Quran because I heard from Muslim relatives that enjoying secular music is discouraged. To some, it’s not permissible at all. But in my bedroom, with my aunt at my side, there were no such restrictions.

As an adult, the music of my favourite band Hyukoh and rapper pH-1 saved my life during my most difficult periods—when I lost my friend to suicide; when I found it difficult adjusting to the 9-5 routine; when my father passed away. That love and connection with music were made possible because my aunt encouraged it.

I just wish she stayed around longer.

When I was 11, my aunt silently packed her luggage, walked out of my bedroom, and never came back.

She barely texted me. At least, that’s how I remember it. Now, I cannot even recall how long she had stayed with me. But I remember it hurt. My mum relayed my aunt’s request to leave her belongings in my room.

I went through teenagehood with her biblical verses, books, and CDs around – all remnants of a different life that became more unfamiliar to me. I finally cleared her belongings when I was 16 (with her permission).

I felt relief when I found more space to perform my daily prayers. As much as her influence rubbed off on me, her absence allowed me space to navigate being what I now proudly call myself: a Muslim woman.

At 16, I felt a nagging feeling to start wearing the hijab. I no longer had an excuse not to wear it now that I was getting ready to become a polytechnic student. I also thought it could shield me from the gaze of strangers, the blank but lascivious faces who felt entitled to objectify me. My aunt found out about it through my mum.

My aunt tried reaching out, but I didn’t want to talk to her. I was a teenager who held a grudge against her for abandoning me. She messaged me over Facebook to advise me to think about wearing the hijab more seriously. I told her I already did before shutting down the conversation. I thought she wouldn’t understand what I was going through.

Now I know she was concerned about the weight of the commitment I wanted to take. It was a huge undertaking that would change my lifestyle in many ways. She could appreciate the stakes at hand. But at the time, I appreciated nothing more than for her to butt out of my life. I’ve never regretted my choice. I just feel bad I couldn’t understand it then.

Written from the perspective of Vivian

Being on my own in the US, far from family, has given me a different perspective. It made me value the good times with my family more.

I moved into Yulianna’s bedroom upon her late father’s request. I was happy to take care of my beloved niece. I remember when Yulianna was born—my sister would scold me for calling her ugly. She was always red and looked like a little bird.

I will not forget this day though—I got a desperate call from my sister because Yulianna was running a very high fever. She was usually scared of me because I always teased her, but this time, she wouldn’t stop crying for me. I don’t pick up calls at work, but for her, I dropped everything and rushed over. I stayed for a few hours to make sure she was okay. Her fever finally broke, and after that incident, we actually bonded better.

It wasn’t easy for me to leave for the US, but I made sure to tell Yulianna about my American partner so she’d understand why I was leaving. I have so many fond memories with her—the fondest being the moment she was born.

I tried to bring her along with me on my travels to Jakarta, but my sister wouldn’t let me. I’d buy her souvenirs and gifts every time, and the way she lights up always fills me with love.

I’m really happy Yulianna wants to speak with me. We haven’t spoken much in the past 13 years. I miss her, and my other nieces and nephews, a lot. But I don’t share my struggles because I don’t want my family to worry about me.

For the sake of this story, I interviewed my aunt. It was time I reconnected with her.

Aunt: How old are you now?

A: And I’ll be… fifty-threee! (Laughs) So how’s everything?

Y: I’ve been very busy and tired. I was recently promoted to manager, and I’m also running my own advocacy platform. When this opportunity to write about you came, I was nervous but relieved. I’ve really been wanting to reconnect with you, even if it’s through work.

A: I was so happy when you reached out. I thought my nieces and nephews abandoned me for being so far away.

Y: Like you, I thought you abandoned me. After you left, it was really difficult for me. I felt like I didn’t have anyone to talk to.

A: But you know you always have me to talk to, right, even if we’re in different time zones? I’m always here, and I will always be your ‘cheche’ (our play on ‘jie jie’, meaning older sister in Mandarin). We should catch up like this every month.

Y: That’ll be nice. How can I forget you’re my cheche? You do know that my eldest brother has plans to get married, right?

A: Yes, I know. As for you, I always thought you would get a Korean husband. (laughs)

Y: (laughs) Yes, I remember that. I have realised that it’s much harder to date a non-Muslim though, so I’m not sure if that will happen, but I’m still open to it. Speaking of Korea, I’m going on my first solo trip to Jeju!

A: Sounds fun! My first solo trip was to New Zealand when I was 18.

Y: Oh, I wanted to go to New Zealand too, but it was out of my budget and comfort zone. I’m realising now that I really do take a lot after you. By the way, do you remember when I first wanted to wear the hijab?

A: Yes, and I was very concerned because radicalisation was quite common at the time.

Y: I didn’t even know anything about radicalisation. I just felt called to wear the hijab on my own terms.

A: That’s good to know. I respect your decision. I was 16, too, when I felt the calling to Christianity. Even here in the US, I still listen to the adhan (Muslim prayer call) when I’m having a tough time because I heard it a lot growing up, and it gives me a deep sense of serenity.

Y: Interesting. Was there anything difficult about raising me as a Muslim?

A: Not at all, because I was also raised with Muslim teachings by my Muslim mother. When it was time for prayers, I always reminded you to pray before your mother could nag at you. Even though we come from an interfaith family, there was a lot more emphasis on respect.

As I wrote this story, I realised how much this part of my identity—the part that gleaned much wisdom growing up in an interfaith family—shaped who I am today. Perhaps this is what silently grounds me in my advocacy for minority communities.

It is serendipitous then that my good friend and Head of Harmony Centre, Ustazah Liyana, had been inviting my Lepak Conversations team and I to their interfaith events. From a movie screening about an interfaith marriage to a sharing by Professor Mona Siddiqui about the human struggle through the lens of Christian and Muslim thinkers, I felt right at home.

Aside from that, I gained something much bigger—having my beloved aunt back in my life again.

Thanks RICE, for fixing my relationship with my aunt.

The views of the writer do not represent those of Harmony Centre.

Check out Harmony Centre’s Instagram and Facebook to learn more about the continuous progress of interfaith dialogues and relationships in Singapore. 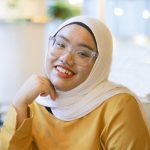 Being a minority is my superpower. 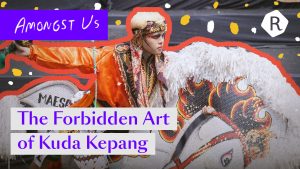 The Forbidden Art of Kuda Kepang

Can Singaporeans get past the dance's controversial practices—like eating glass and being in a ‘trance’—or is this art form doomed to extinction? 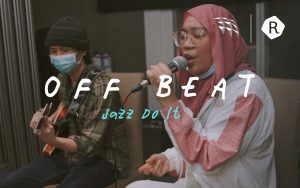 Off Beat: Jazz Do It

Iman is on a path of dismantling stereotypes as a Muslim jazz vocalist. What happens faith comes into conflict with doing what you love? 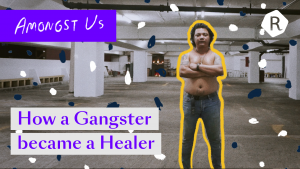 From Underground Gangster to Healer of Bodies

A Tukang Urut, also known as a healer and practitioner of traditional Malay massage, is typically known via word of mouth among the elder Malay-Singaporean community. 10 years into his craft, Firdaus opens up about how the job has helped him to walk away from violence and darker times in his youth.