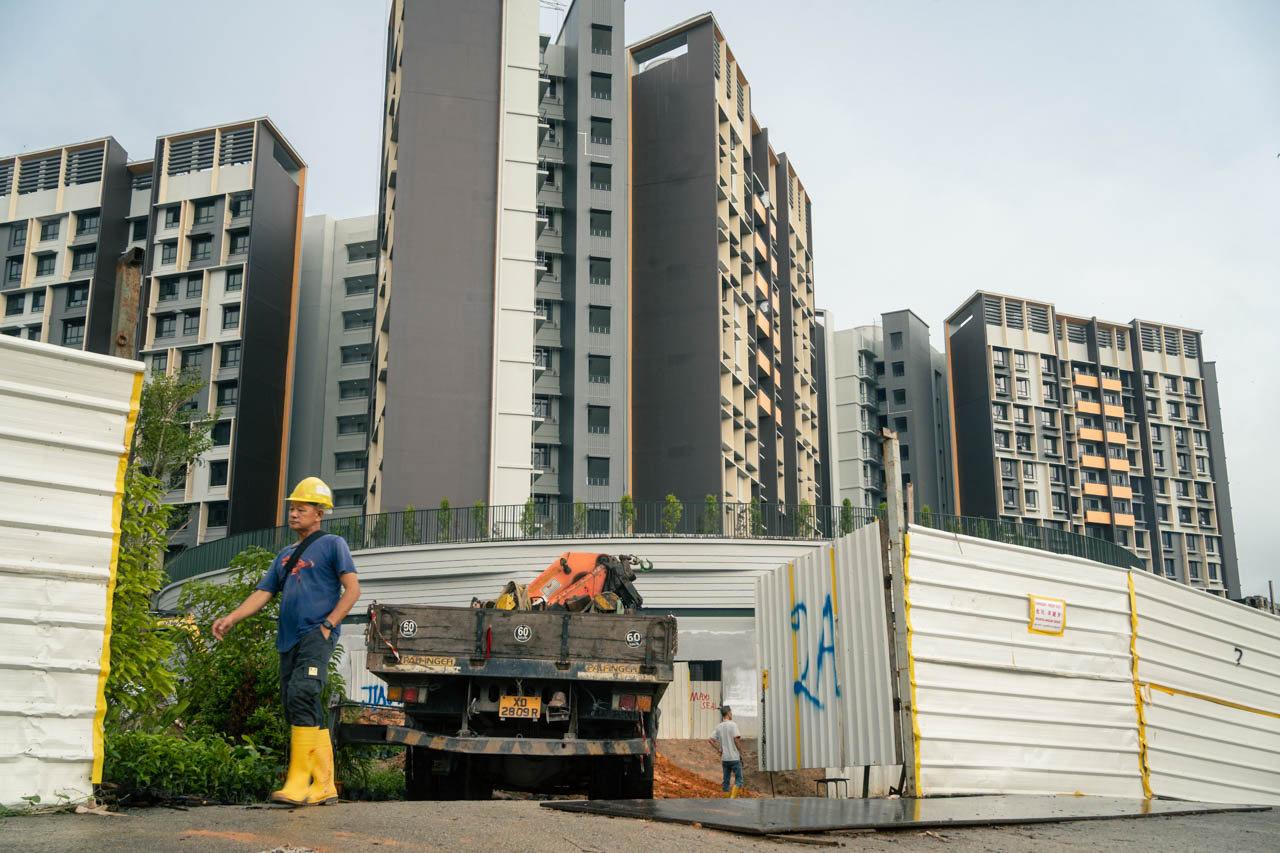 All Images by Stephanie Lee unless otherwise stated.

Bread-and-butter issues remain the most urgent contention of the average Singaporean. From the underpaid delivery rider to the brash boardroom executive, everyone is united by a perennial worry: whether the ruthless hand of the free market will shine a light our way.

High inflation rates and the impending global recession suggest we’ve all been left in the dark—except maybe, families who managed to sell their HDB flats with million-dollar price tags. But I digress.

The question on everyone’s minds: will Singapore’s future generations be able to afford public housing down the road? The jury is still out. And until we know for sure, we are left scrambling.

But we’re not alone in this struggle—the powers that be scramble along with us. Heated Parliamentary debates over HDB prices sparked intense public discussion. And lest we get blinded by the non-stop stream of information, we’ve tracked Singapore’s housing debacle over the past two months, so you don’t have to.

And what a glorious month November was. Three questions by opposition MPs Pritam Singh and Gerald Giam and NCMP Leong Mun Wai during the Parliamentary sitting on the 7th lit the proverbial fuse to the onslaught of discussions on Singapore’s housing market.

These questions did not occur in a vacuum—the stage was set in the previous month, sparked by a Facebook post on 4 October by former GIC Chief Economist Yeoh Lam Keong. He claimed that HDB’s overall $270 million loss on a BTO project in Ang Mo Kio was nothing more than “an accounting sleight of hand”.

Mr Yeoh alleged that the government acquires land below cost and transfers it to HDB without a fee. In his view, the overall loss was simply what the government would have made if that land had been sold at market price instead of transferring it to HDB.

POFMA correction notices were swiftly issued to Mr Yeoh and The Online Citizen for supporting that view on 14 October. National Development Minister Desmond Lee clarified that HDB purchases the land from the government at a fair market value—HDB’s incurred losses were “accurate and real”.

Leader of the opposition, Pritam Singh, asked whether, in view of the recent POFMA correction notices, HDB could start providing a breakdown of the total development costs of all new flats and the value of the subsidies applied to the newly built public housing.

Mr Pritam Singh proposed that there was a correlation between the POFMA Corrections Directions and the subsidies the government applies to public flats before they are sold.

The Second Minister for National Development, Indranee Rajah, responded. “My straightforward answer is that it would not be helpful or meaningful to do so.”

She explained that Singaporeans cared instead about whether they could afford public housing rather than the flat’s total development cost.

Whether members of Parliament need to justify their Parliamentary questions is a deep and dark rabbit hole waiting to happen.

“Again, Sir, I would ask Mr Singh to file a Parliamentary Question formally. The answer is likely to be technical, it has to do with how we treat the land in our books, and I really want to make sure that both the Accountant-General and the Auditor-General are satisfied that what I say is not inaccurate,” she answers in closing.

The full exchange between Mr Pritam Singh and Ms Indranee Rajah is difficult to document. But you can read it here.

MP Gerald Giam asked how many first-timer Singaporean couples were unsuccessful in their BTO applications in non-mature estates two, three, four, five, and six or more times and what can applicants do to increase their chances of securing a flat.

In a written response, Mr Lee shared figures on how many first-timer Singaporean couples were unsuccessful in their BTO applications in non-mature estates.

He added that “to increase their chances of securing a flat, applicants can apply for a flat in a town or flat type that has a relatively lower application rate.”

“From past launches, about 40% of invited flat applicants do not proceed to book a flat. Thus, an application rate of not more than 1.7 times would give the flat applicants a good chance of securing a unit,” Mr Lee explained.

This is where things get interesting. Evidently, more first-time couples are successful in their BTO applications, but only if they apply for projects in non-mature estates. This is no secret.

According to HDB, almost 90 per cent of first-time families applying for BTO flats in non-mature estates were successful within two tries. First-timer families are encouraged to apply to non-mature estates for better chances of securing a home. It’s a decision that makes the most sense.

Those figures were not provided at that time.

Over the next few weeks, mainstream media released explainers of how HDB keeps public housing affordable and announced new BTO flats in non-mature estates slated to be released for application.

Mr Desmond Lee, hard at work, revealed that the government was reviewing the mature/non-mature estate classification system. The rationale? Distinctions between the two were becoming less relevant as Singapore developed.

Still, the distinction makes the public perceives mature estates as one that has better amenities and connectivity than non-mature estates. This perception leads to first-time couples preferring to apply to supposedly “better” mature estates, which, more often than not, end up unsuccessful due to demand.

Strangely, the same thing was happening with BTO projects in non-mature estates. In our story, our writer, Nicole, wrote: “Take northern BTO project Woodlands South Plains, for instance. Most of us can agree that it is a tad far from most things, like the Central Business District or Orchard road (but not the Zoo).

There, the application rate for a 4-room BTO was 3,131 to 268 units—a whopping 11.7 people clamouring for a slice of Woodlands living.”

Up to this point, HDB has not provided the application success rates for BTO Project mature estates.

This, I believe, was to encourage buyers, who may be spurred by the higher application success rates, to apply for projects in non-mature estates.

Until the Parliamentary Sitting on 30 November, that is. MP He Ting Ru asked four questions with regard to HDB’s BTO applications in mature estates in each of the last three years:

In a written answer to MP He Ting Ru, Mr Desmond Lee clarified that from 2019 to 2021, between 20 to 24 per cent of first-time families were successful on their first BTO attempt in a mature estate.

This was the answer to the question we had posed to HDB two weeks ago.

As if in direct response to our article featuring a homeowner who was unsuccessful all thirteen times he applied for a BTO flat, Mr Desmond Lee addresses the supposed extravagance of these failures.

Mr Lee then went on to add that it would not be representative to look at the maximum number of unsuccessful ME BTO attempts made by an FT family before they succeeded.

“This is because there are some applicants who may not have an urgent need for a BTO flat and may be applying exclusively to ME BTO projects or more attractive BTO projects only.”

“Nevertheless, our records show that over the past three years, of all FT families who were successful for ME BTO flats, less than 2% took more than five tries,” he shared.

7 December: Light At The End of The Tunnel? Maybe.

In a move that I view as unprecedented, HDB and MND released a breakdown of costs for BTO flats in a joint statement. Answers came a month after the heated debate between MPs Pritam Singh and Indranee Rajah.

The statement emphasised that BTO flat prices are determined by applying subsidies to the comparison of the prices of surrounding resale flats.

On 11 December, NCMP Leong Mun Wai shared a Facebook post that alleges that if the government did not consider land cost in BTO prices, prices might be lower, but this would only end up hurting all Singaporeans.

In response, Senior Minister of State for National Development Sim Ann explained that increasing housing subsidies more than current levels would mean reducing spending in other areas—education, healthcare, and security.

“We may well also have to raise taxes to pay for the higher housing subsidies,” she said.

Singapore’s housing question remains a perennial headache for policymakers and the public. At its heart lies the balance of managing inevitable trade-offs for different but equally essential purposes—education, healthcare, and housing.

Whether tweaks to an already messy housing system are necessary is a debate for another day. An overhaul of the entire system may even be required to keep up with the times.