What I Learnt From Being A Safe Distancing Ambassador in 2020 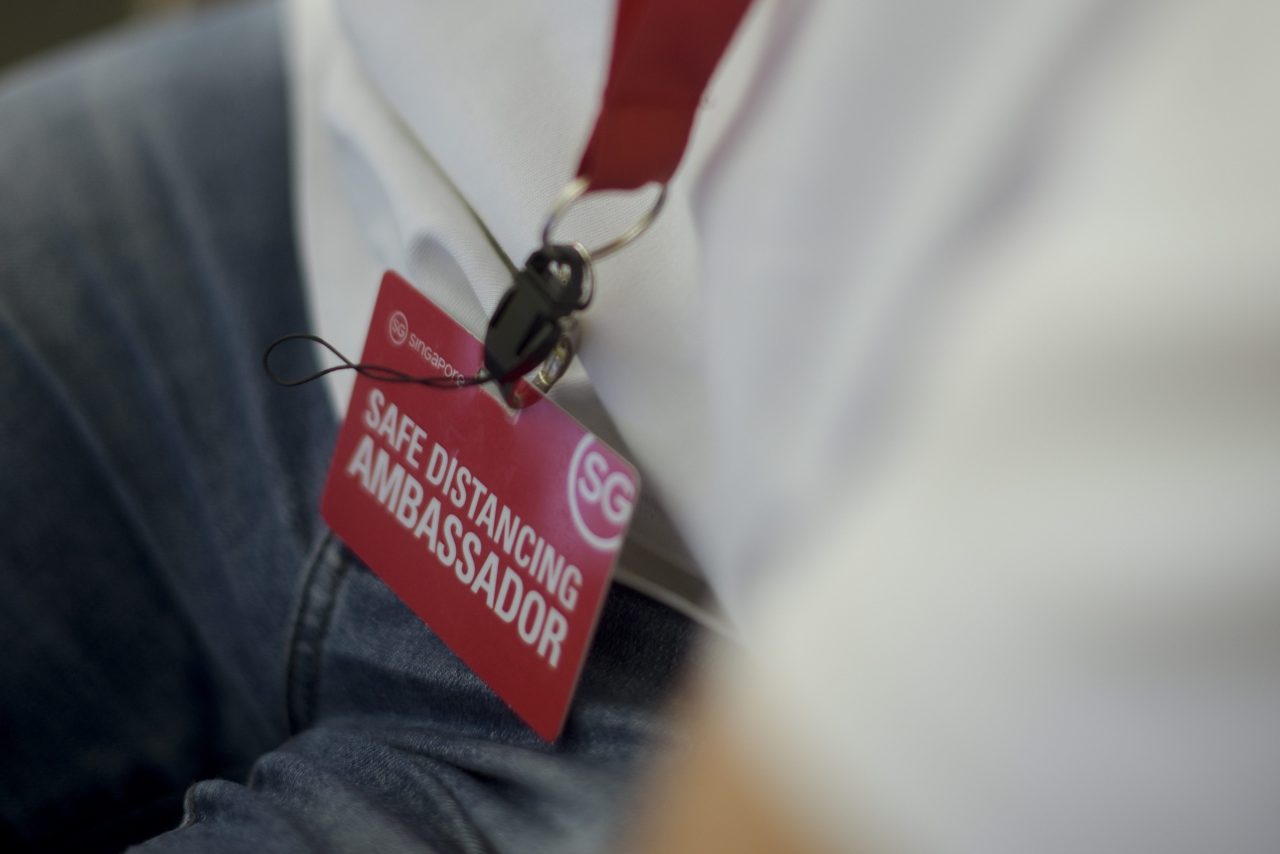 All images by Feline Lim for RICE Media.
“SDAs are like our new carpark aunties,” a friend casually remarks over dinner one day.

The comment stings, as I too, had at one point been part of the nation’s 3,000-strong brigade of Safe Distancing Ambassadors (SDA). Yet it’s true—the looks of disdain I received during my four-month stint often felt like a lite version of a very specific kind of scorn, reserved specially by errant drivers for parking wardens.

When SDAs were first deployed in April as COVID-19 cases were starting to spike, it never occurred to me that I would become one of these “professional pao toh kias”, as another friend of mine put it, piling on the love.

But as the Circuit Breaker period sounded the death knell for my budding freelance photography career, and having baked and eaten way too many sourdough loaves in lockdown, I decided that I needed to sort my life out. Following a slave driver gig packing groceries at a supermarket, I chanced upon the SDA opening, mustered every answer to the template question ‘Why do you want to work in the Public Service?’ and before I knew it, was assigned the unenviable task of inspecting void deck wakes.

SDAs are the epitome of Singaporean pragmatism. A “two-pronged approach”—as the state would describe—to dealing with both the public health and unemployment issues arising from the pandemic. Being self-employed all this while, I had always looked at friends working in the civil service with envy, especially for the benefits and stability their careers offered. I imagined that one day I might, like them, join the government. I just never expected it would look like this.

As for my actual job, let’s just say being anywhere near a stranger’s funeral is not a scenario most people enjoy, much less practise for. Yet that was what I did at least five to six times daily at different locations.

Every evening, waiting to receive our postings for the next day was like taking part in a bizarre lottery. There was no way to predict where exactly the venues would be. After being given our locations I’d chart my route using Google Maps, slotting in my lunch break where I could, and plan the wake visits around funeral processions which took place at specific times.

These processions were usually longer and more involved affairs that required us to arrive earlier to remind funeral directors in charge of the event⁠—especially for larger crowds⁠—as it was a time when emotions would run higher and people were more likely to forget or ignore safe distancing rules.

I remember a Sunday when I was tasked to visit a large funeral procession that had clearly exceeded the then-20-person limit. Summoning the courage to approach the group, I gently reminded a mourner that they were flouting the rules, and asked that they adhere to the safety guidelines. He responded by walking up close and loudly accusing me of not keeping my distance from him. Taken aback by his obvious show of intimidation, and the fact that he was twice my size, I walked away, as instructed to do when faced with a threatening situation.

But for the most part, my daily visits were uneventful. People would nod in acknowledgment as I reminded them of the measures they had to follow, with temperature scanners and SafeEntry QR codes in place where they should be. I wondered if this compliance was more reflective of a genuine fear of catching the virus, or a desire to avoid getting into trouble with authority. Because there were also other occasions when, as I appeared, I would see this same scene play out, almost on cue: People would suddenly pull up their masks and start speaking in hushed tones, quickly spacing themselves apart from one another.

I have even seen people running up the stairs to hide from me—only to reemerge after I’d turned my back and delivered my message as needed.

You’d expect that spending a good third of what has been the longest year ever as an SDA would have drilled all manner of safe distancing regulations into my head. Yet I too find myself prone to the same lapses, whether out of convenience or laziness.

Sometimes, I catch myself allowing my mask to stay off for just that much longer after I’m done eating. Just last weekend, I went to town to do my Christmas shopping, adding to the already massive crowds. Faced with this internal conflict from balancing my role as an SDA with that of a private citizen, I went about my days sometimes pretending not to notice the irony of the whole exercise, playing along with the charade.

During each visit to a wake, there would be this palpable sense of pity that went both ways. On my end, for those mourning the death of a loved one in the shadow of this pandemic, and having to hold back experiencing the full sense of their grief. On their end, for my unfortunate predicament of having to keep people apart, at a time when they needed each other the most. A widow coming to terms with the loss of her husband, the family clan unable to partake in the passing of their matriarch. Deaths are hard enough as they come without having to be mindful of safe distancing restrictions.

Despite my intrusion, on more than one occasion I was offered a drink to quench my thirst from the beating sun, or a seat to wait out the rain. There were wakes that I’d have to visit repeatedly over the course of week, and families greeting me and asking me how I was made me feel like more than just a necessary annoyance that had to be visited on them.

The truth is, I only took up the gig to earn some spare cash, not expecting anything more. And yet I gained an experience that almost makes me miss the daily grind of the stint.

As an SDA, I’ve learnt to be less judgmental, and to be more forgiving and empathetic. I’ve learnt to see how I am prone to the same mistakes others make, and that it is wiser to think of all this as a collective effort in getting through this pandemic. And remember that the road to a full economic recovery will be a long one, so why make it harder for each other than it has to be?