Saying ‘I Do’ When the Regulations Say ‘Please Don’t’: Capturing Love During a Crisis 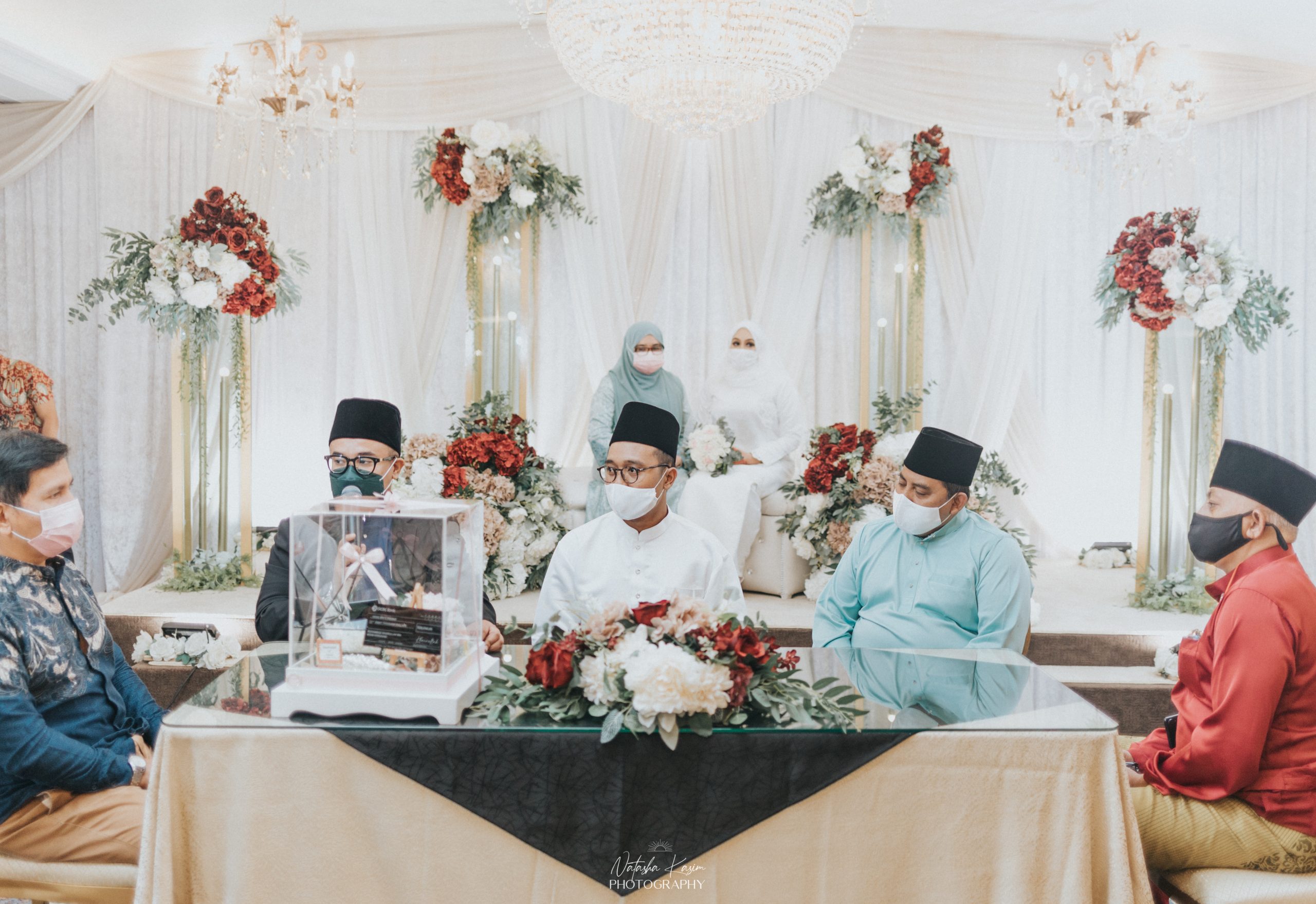 “When I dreamt of my wedding as a child, I imagined it would be huge. I envisioned a church affair with 400 guests and then a rowdy banquet afterwards.”

Jasmine, 29, is a freelance tutor who got engaged in December 2020. In the success of Phase 3 and an impending travel bubble with Hong Kong, she saw a glimmer of hope that her dream would come true. But then 2021 happened.

“As the pandemic stretched on and on, it became clear to me that we couldn’t host our ideal wedding any time soon.”

The date for her scaled back celebration is tentatively set for next month, although planning the wedding has been anything but a dream. As the restrictions have toggled back and forth throughout this year, so have the capacity limits for receptions.

“We’re only allowed to have 120 pax at our chosen venue. Then, we have to split them into zones of forty, because they can’t mingle. Only the bride and groom can roam around to take pictures. It’s not going to be the rowdy banquet I imagined.”

Jasmine’s wedding has the additional complication of unvaccinated guests. “Some of our guests won’t get the jab. To attend the ceremony and the banquet, they have to complete the PET twice, because the results are only valid for 24 hours. But we’re willing to cover the cost if they choose to come.”

For this couple, postponement is not an option. “We’re pretty staunch Christians, so we’re not going to live together or be intimate until we get married. For us, marriage is more important than a wedding. If it means having to compromise—then so be it.”

Jasmine’s commitment to lock down her love during this time is quite unique. In 2020, the number of new marriages in Singapore fell by 10.9%. The Department of Statistics said the drop in nuptials was “due to disruptions caused by the COVID-19 pandemic, including circuit breaker restrictions and safe management measures applied to wedding solemnization and receptions from March 2020.”

Saying ‘I Do’ When The Regulations Say ‘Please Don’t’

Despite Jasmine’s enthusiasm to barrel ahead with the wedding, I noticed a thread of uncertainty weaving through our conversation. The couple has yet to pay in full for any of their wedding expenses. “Anything can happen at the last minute. I do feel for the vendors. No event in 2021 is a sure thing.”

Volatility is a hard pill to swallow for all stakeholders in the wedding industry. It’s been especially tough for the wedding photographers, who are tasked with capturing the literal vision of love to survive.

“For our pre-wedding photos, we ended up shooting with a friend because it was less complicated. Even then, we didn’t have an official permit to take pictures with our masks off. It was guerilla style, and handled by a very lean party of four.”

Jasmine has already booked a professional photographer for her ceremony next month, but like the other vendors, he hasn’t received a full deposit either.

In 2019, Adrian Seetho was the go-to photographer for about 70 weddings. Almost half his business was conducted overseas, capturing the ‘pre-wedding photos’—a trend that picked up steam for local couples in recent years. It was the perfect storm to hone his technical skills and exercise his creativity: the foreign landscapes allowed him to exercise his creativity in setting the stage for his shoots.

And then, COVID-19 struck. The financial toll of the pandemic was immediate for Adrian. In the blink of an eye, his overseas shoots were canceled. Then, his local bookings were postponed indefinitely. For three or four months, he had no income.

Towards the end of the circuit-breaker, he started selling prints of his travel photography. Though it didn’t come close to a stable income, “it was something at least.”

In 2020, Adrian estimates that he’s only shot about 35 weddings—a 50% drop from his usual business. When things started to pick up in Phase 2, some of his postponed sessions resumed.

But the sinking demand wasn’t the sole issue affecting his bottom line. The intimate nature of the new ceremonies hurt business as well.

“In the past, a wedding shoot would last about ten hours—and I typically bill hourly in my packages. Pandemic weddings are much shorter. I’d say probably between three to five hours at the most.”

Further, an existential challenge has plagued Adrian and some of his colleagues in the business: there are only so many places in Singapore to shoot. Though he firmly believes in the island’s unique charm, the sheer size of it means there’s not much to explore beyond a certain point.

“Before the pandemic, shooting overseas was our chance to flex our artistic muscle. Now, we shoot the same spots over and over again. We’re suffering from creative burnout. Some photographers will take a few days to cycle around and look for new spots, but even so, they’re not as beautiful as the handful of overused places that look beautiful through the lens.”

New Kids on the block

Since the middle of 2020, Adrian has noted stiff competition on the market, which was already saturated. “Young photographers fare better in the industry,” he explained. “There’s a limited window for success, from the early ’20s to the mid ’40s.”

This is partly due to the physicality of the job—early starts, constant travel, and weekend gigs. But there’s a charismatic element to the industry, too. Most people who hire wedding photographers aren’t natural in front of the camera. So, a good rapport between the photographer and the subject is imperative. After all, the assignment is to paint a portrait of true love.

Naturally, younger couples gravitate to photographers in their age bracket.

It’s All About The Fresh Perspective

This ingenue’s origin story was kind of an accident. In November of 2019, in her final year of studying literature at NTU, Natasha Kasim rekindled her love for photography. “I started shooting my friends to build a portfolio and market myself, to try and figure out if I can make money from doing what I love.”

Her question answered itself when her business picked up steam. By the end of 2021, she will have captured 35 events, with weddings and pre-weddings as a significant portion—and photography is only her side gig (for now, at least). Like Adrian, Natasha laments the saturation of the market. “It’s very hard to get jobs, and you need to either stand out, have connections or good word-of-mouth marketing.”

Natasha’s success is unusual, given the crowded market and the challenging climate. So, what’s her unique selling point?  “I think I bring a fresh perspective. I do portraits as well as couples and I try to keep my photos as creative as possible—not just doing the same thing as everyone else. Whether it’s with a new lens or cool lighting, I always mix it up.”

The all-important rapport is one of Natasha’s unique sells, too. “I’m a female photographer, and some women are just more comfortable shooting with me. The industry is sort of male-dominated.”

Despite her success, something is holding Natasha back from entering the industry full-time. By day, she works in marketing and operations at a start-up. “I’m conflicted because when I treat photography as a full-time job, I’m afraid it’ll become stale and stressful.”

It’s not the amount of work that scares her—she enjoys doing the administrative tasks, and even gets a kick out of dealing with problematic clients—it’s the instability of the industry.

“Being a freelancer is unstable, and that’s heightened by the pandemic. I do love this line of work, but I’m waiting for the right moment to go full-time. I want to be sensible.”

Natasha’s fiancee has encouraged her to lean into the uncertainty. “He said that when you’re desperate you have no choice but to make it work.”

A challenge for all — Shapeshifting regulations

In conversation with both photographers, I noticed that a general lack of clarity about the safe distancing measures has impacted them negatively. Given that Natasha has mostly worked in the industry during the pandemic, she’s used to working with smaller parties with fewer hours on the clock. However, when she tried to hire another photographer to help her out, the regulations put a spanner in the works.

“The guy I wanted to hire was unvaccinated. Not by choice, he was allergic to the vaccine, but he was unable to work at the hotel we were shooting at. I only found  out about this a few days before the wedding. It was stressful. There are some  hotels that will allow unvaccinated vendors with a negative test, but many others won’t.”

Adrian elaborates on this confusion: “At the end of 2020, things were quite stable. When we shifted into Phase 3, we stayed there for a while. In 2021, it’s been more of a yo-yo effect between Phase 2 (HA) and the escalating situation right now.”

At the beginning of Phase 2, photographers weren’t allowed to shoot in the national parks where they’re now conducting the bulk of their business. They were required to write in with requests to shoot. Some did, others didn’t.

“It’s a lot of word of mouth and not a lot of clear instructions.” A side effect of the gathering limits means that some couples aren’t able to take pictures on the same day with their whole wedding party.

He further described the industry during Phase 2 (HA) as a grey area: at hotels, the vendors aren’t counted under the official capacity limits. However, a photographer’s job starts at home—capturing tea ceremonies, bridal veiling, and gate crashing. But there’s no clear guidance on whether or not the photographer must be counted within the 5 pax home gathering limit.

“I’m usually with clients for the whole experience, from start to finish. At some points, I wasn’t sure what or where I could shoot. To err on the side of caution, I ended up losing some billable hours by not wanting to break the rules.”

When I asked Natasha and Adrian about the trajectory of the industry, they felt unsure about the future. It’s no surprise, given the fickleness of the regulations as of late. Natasha’s keeping her head down and building her business, intending to go full-time in the future. Adrian’s hoping for the borders to open sooner rather than later so that he can find his inspiration again.

I can’t help but recall my piece on languishing while writing this. It still feels like we’re treading water. The promised ‘roadmap’ out of the pandemic is blurry, and an air of uncertainty lingers over our heads. Online, I’ve noticed mixed reactions to the current restrictions. From what I’ve read, it seems that most people are in favor of staying where we are, or implementing harsher measures.

There’s an opportunity for Singapore to set the precedent for reopening in South East Asia. It’s worth asking if the slow-react & risk averse approach, which we’ve taken throughout the pandemic, is a prudent strategy for this. We’re running out of patience and time. Will ‘just scraping by’ continue to suffice as the new normal for Singapore?