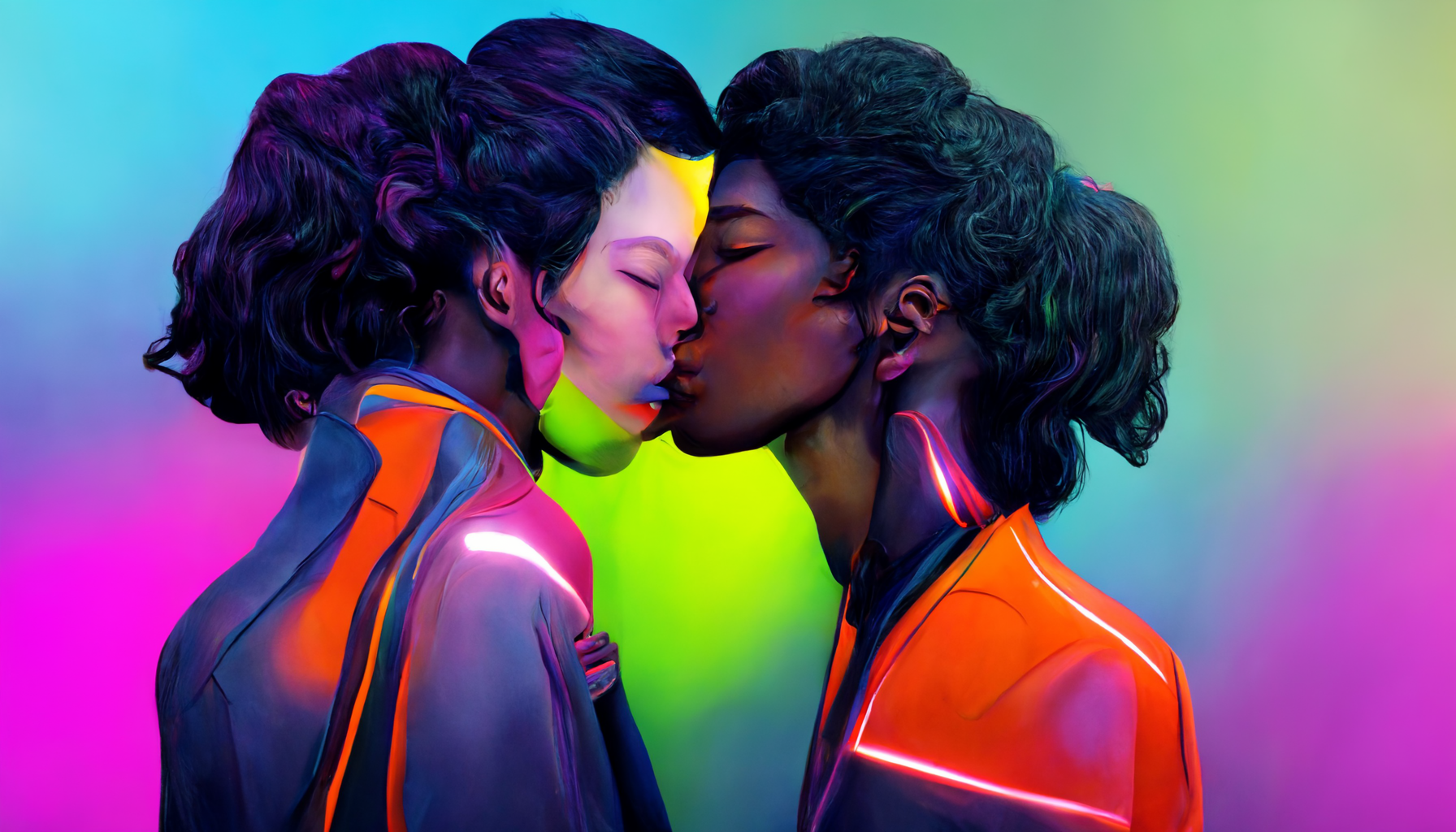 Top Image: A same-sex interracial couple in the metaverse, interpreted by Midjourney AI.
This story first appeared on Blockhead.co.

“When I first got into the Web3 space a year ago, I had huge imposter syndrome,” Sherawaye Hagger, the Head of PR & Communications at Unilever, tells me.

“The only way for me to learn was by doing, so I started actually buying NFTs. It nearly broke me, and I won’t lie, it nearly made me cry.”

Sherawaye is not alone in her experience—all the women I spoke to for this piece had faced multiple struggles in their pursuit of entering the Web3 industry. Much of this stems from the fact that blockchain is an immensely male-dominated arena, making it a challenge for outside voices to infiltrate.

When I ask Acacia Leroy, Head of Trends & Insights at Culture Group, what it is like to be a woman in a male-dominated space, she tells me that “it feels normal.”

“And that’s exactly the problem, isn’t it?” she continues.

This reminded me of my time at Coinfest Asia, a Web3 conference I attended in Bali at the end of August.

On one of the sunny afternoons at the event, I pushed my way through sweaty crowds of predominantly male beach-dressed conference goers in search of a panel featuring women in crypto, located in a side tent.

After finding it, I noticed that only a mere dozen people showed up for the panel. At one point, even the moderator alluded to the issue at hand—why couldn’t the women in crypto also get their time on the main stage?

The Barrier to Entry

Gender issues are becoming increasingly pressing in the Web3 space. Since last year, Singapore’s Ministry of Home Affairs (MHA) has started investigating sexual assault in VR, raising questions about how safe the metaverse is for women and children.

“People are still wrapping their heads around what these experiences are like because understanding how you’re psychologically affected within digital environments is still a new arena,” Marissa Trew, Senior Content Lead at Blokhaus, tells me.

“This will become a much bigger problem later if we don’t sort it out at the beginning.”

A vital start involves ensuring that more women, minorities and gender-queer individuals are involved in building these technologies. With their voices involved, better questions can be asked in the development stages, and blind spots can be caught earlier on.

But to bring in more people from different walks of life in the industry, we also need to look at what is keeping them away in the first place.

When Sherawaye told me about her harrowing experience entering the NFT space, she specified that living in Singapore made it particularly difficult.

“If I was learning about NFTs in the UK, I could easily find someone in fashion who could explain them to me, and we could giggle and laugh while learning,” she explains.

“Here, Web3 is mainly centred around finance, and the people in the industry are mostly men, so it’s more about making money and investments rather than creativity. There is a more serious tone around it all as well.”

As Sherawaye noted, Web3 is about more than just DeFi (decentralised finance) and cryptocurrencies—it is an umbrella term for everything to do with creating a new World Wide Web. It extends to multiple industries, especially in creative fields.

But currently, where you are located still often dictates the type of blockchain projects you are exposed to. Someone in Singapore for instance, where finance and business are among the most prominent industries, may learn about Web3 in a drastically different way than someone living in a city with a more vibrant art scene.

For example, at this year’s New York Fashion Week, attendants got to experience fashion shows in digital realms thanks to Web3—think augmented reality runways, virtual avatars, and digital clothing.

As Marissa tells me, “what NFTs and blockchain have done for the art industry is so different from what is happening in the cryptocurrency space.  As this distinction becomes clear, so many more people from different walks of life will feel like they can get involved.”

An Accepting Community For All

When I think of Web3, I imagine a stale, technical, and largely homogenous industry. This idea of mine is entirely shattered when I meet Stacey-Ann Pearson, a black, queer female who has been in the industry for five years.

“I have found that you can bring your full self. You don’t have to try to fit in because the entire culture is built on counterculture.” Before being in the blockchain industry, Stacy worked in the finance sector in New York and the tech industry in China.

“But, isn’t Web3 the land of crypto bros?” I respond, laughing, wondering how my impression of Web3 is so different from hers.

“The whole movement began as a rebellion of the traditional system,” she explains. “Blockchain technologies are counter to the norm, so many early adopters were people outside the mainstream.”

She added that the shift in demographic—essentially when Web3 became permeated with bro culture—happened when blockchain technologies started to become mainstream and, therefore, needed to scale.

The tech and finance industry came in for this to happen, as they had the structures and institutions that could grow projects to new heights. But with this came an influx of tech and finance bros, who eventually became the crypto bros that made the space notorious for its toxic masculine energy.

While Stacey has noticed the demographic change over the years, she still finds the digital realm of Web3 as empowering as ever.

On blockchain communities online, one can choose to be completely anonymous. Avatars and usernames used on popular platforms like Discord don’t have to identify your gender, race or sexuality.

And to be a part of certain online NFT groups or communities, individuals only need to prove their ownership of the specific NFT through their wallet, which also contains no identifiable information.

“This is a core tenet we call decentralised identity, which is one of the movements that came before Web3, but Web3 has brought it out in tangible ways,” Stacey explains.

How Blockchain Can Uplift the Marginalised

Decentralised identity, which offers more anonymity, can propel projects that benefit marginalised communities in new ways. For instance, in some countries where LGBTQ+ rights are limited, individuals may hesitate to participate in or donate to related charities for fear of being associated with the movement. NFTs, on the flipside, can be bought anonymously and without fear of consequences.

Earlier this year, the first sexual wellness space was built in Decentraland, a virtual 3D world powered by blockchain technology in the metaverse. The temporary pop-up spanned four virtual floors with educational videos, workshops, art exhibitions and auctions. It offered a safe space for guests to partake in healthy conversations around sexual wellness, no matter their geographic location.

Someone living in a liberal society may not find such spaces particularly exciting, but for women and marginalised communities in countries where these conversations are stifled, the metaverse could offer them a safe space for education they wouldn’t usually get access to.

Stacey tells me that NFTs also help individuals use blockchain to seek help for their own issues, without having to necessarily turn to charities or bigger organisations.

And beyond fundraising, NFT projects can give direct benefits to buyers by granting them access to exclusive services or support. In June, the world’s largest LGBTQ-inspired NFT collection, Pride Icons, launched 100 NFTs of queer icons like RuPaul, Lady Gaga, and Cher.

Among other perks, each NFT buyer received a US$1,800 discount on services by Tammuz Family, an agency helping queer couples have children and access surrogacy.

Beyond the efforts of collectives and individuals, there is also a role for corporations to play in ensuring the metaverse becomes an inclusive space.

Earlier this year, Closeup, a Unilever toothpaste brand, spearheaded a pivotal project for marriage equality rights on the metaverse.

Wanting couples across the globe to break free from societal constraints around marriage, a Closeup City Hall of Love was built in Decentraland. At the City Hall, couples can mint NFT marriage certificates and make their union permanent on the blockchain.

“The whole premise of Closeup was to say that, regardless of where you live, whether the UK, India, or Singapore, you can have the freedom to love, whether it’s an interfaith, intercaste, or same-sex relationship,” Sheraway shares.

“In Singapore, same-sex couples still can’t get married, and in India, interfaith or intercaste marriages are also frowned upon. The NFTs give people a way to recognise their relationship and be married.”

While not currently legally recognised by governments and legal institutions, projects like these prove that decentralised technologies have the power to give individuals agency over their lives by bypassing societal and governmental restraints.

“The public loved it, and we even saw a couple in Singapore who were in a same-sex, female relationship get married in the City Hall of Love,” Sheraway recalls.

Still, while projects like these are promising, they remain few and sparse, largely because of the diversity issue in the Web3 workforce. As Acacia tells me, “Web3 is touted as the future of the internet, and the future of anything will only be as good as the people building it.”

Beyond race, gender, and sexuality, there are also the issues of income disparity and geographical location the industry can’t ignore.

Not everyone across the globe has access to blockchain technology, or more importantly, can afford to use it—as a volatile space, the possible losses that are part of the process for some may be a risk too big for others.

It’s not a grim scenario necessarily, as regulation and technology are evolving to make the space more accessible each day. But it is a slippery slope—we are in the process of creating a new world wide web, and that is tremendously exciting if anything. But if we are not careful about its inception now, we may find ourselves unprepared for what it may morph into down the line.